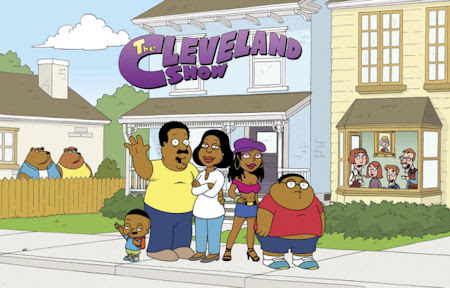 Rather than attempt to explain the premise of The Cleveland Show myself, I thought I would let the words of the show's main voice actor, Mike Henry (voice of Cleveland), explain it.

"Cleveland has kind of had enough in Quahog - he kind of realizes that he wants his own friends, his own sidekicks, his own stories. So he sets out to California to make it in a way that we'll have to keep a secret until the show starts, and then he ends up somewhere else, which we'll also keep a secret until the show starts. But he basically goes home – he goes to his hometown in Virginia and rekindles an old high school flame."

The above explains this show far better than I could. I'll go ahead and warn you, though, that if you're one of the people who detests both of Seth MacFarlane's comedies (Family Guy, American Dad), you can stop reading *now* as, though the show generally has a cohesive pilot (that, as a bonus, usually makes sense) it is still very clearly a Seth MacFarlane show.

A word of caution here: Because of the animated nature of this show, none of the cast will be physically present in any episodes, and many characters may rotate in-and-out based upon the needs of the episode. Also, as is common in animation, one voice actor may provide the voice for multiple characters.

Mike Henry (Cleveland, Rollo) performed stand-up and improv and acted in commercials for several years before meeting Seth MacFarlane in 1995. Henry was a writer and producer on Family Guy for the series' first six seasons. He voices many of the characters he created, including "Cleveland," "Cleveland Jr.," "Herbert," "The Performance Artist," "Consuela" and "The Greased-Up Deaf Guy." His additional acting credits include Scrubs, Gilmore Girls, Yes, Dear, American Dad! and Robot Chicken. Henry and his brother are the creators of the internet-based series Kicked in the Nuts.

Sanaa Lathan (Donna) was recently seen in Tyler Perry's The Family That Preys alongside Perry, Kathy Bates and Alfre Woodard. In 2004, Lathan earned a Tony Award nomination for her performance in the revival of the Broadway classic, A Raisin in the Sun. She later reprised her critically acclaimed role as "Beneatha Younger" in the television adaptation of the play alongside Sean Combs. Lathan's most recent credits include her NAACP Image Award-nominated roles in Something New and Nip/Tuck. She previously starred in Out of Time, Alien vs. Predator, Brown Sugar, Love and Basketball and The Best Man.

Reagan Gomez-Preston (Roberta) and her mother, at age 14, made a trip to Los Angeles with Dateline documenting their journey for an episode about young actors. Within a few of weeks of landing in Los Angeles, she had booked the remake of Freaky Friday with Shelley Long. Shortly after, Gomez-Preston landed a starring role on the Robert Townsend series The Parent Hood, and with his guidance and support, she co-wrote one of the series' most-watched episodes on teen rape. Her other TV acting credits include Love, Inc., Carmen: A Hip Hopera, ER, That '70s Show, JAG and One on One. Her feature film credits lead roles in Never Die Alone opposite DMX, Love Don't Cost a Thing and Beauty Shop with Queen Latifah. Gomez's additional film credits include the independent films Doing Hard Time and Trois 3: The Escort.

Kevin Michael Richardson (Cleveland Jr., Lester the Redneck) is no stranger to animation. He has voiced hundreds of characters for films, commercials and video games, including Family Guy and American Dad! Richardson was nominated for a Daytime Emmy for his work as The Joker on the animated series The Batman. He has also voiced characters on The Boondocks, The PJs and The Penguins of Madagascar. His feature film roles include Teenage Mutant Ninja Turtles, The Matrix III and Transformers: Revenge of the Fallen. Richardson starred in the television series The Knights of Prosperity and recently appeared in the drama series The Cleaner.

After Peter (Peter Griffin, from Family Guy) destroys his house one too many times, Cleveland has had enough and decides to move to California with his son Cleveland Jr. Along the way, Cleveland decides to stop in his old hometown of Stoolbend, VA where he meets an old high school love interest and hits it off.

Here's the thing about this: As a self-contained episode, this program was OK. The episode feels something that would be consistent in tone and quality from the early years of Family Guy, before the show got consumed with cutaway gags and time-filling jokes that run on for too long. It really does harken back to a time before Family Guy lost its way.

On paper, I should really like this show. But there's this nagging feeling I keep having when watching. Perhaps it's because they took the 2nd least interesting character from Family Guy (really, is there any character less interesting than Meg?) and gave HIM his own show. This, at least in the first cut of the pilot, is even referenced in a line by Stewie before Cleveland & son drive off into the sunset, with Stewie remarking in shock that it's *Cleveland* getting his own show?

Also, a note: The first quarter of the episode – the expositional cold open - at least in the version I viewed, *is* set-up as seemingly your usual Family Guy adventure. It has the same musical transition, your usual Family Guy characters (Quagmire, Joe, Peter, Stewie, Brian, et al.), and doesn't become The Cleveland Show until the main theme hits a few minutes in. You'll know when the transition occurs as the show suddenly shifts from full-frame to widescreen in a nice effect.

Pilots often aren't the strongest episodes of a series, and do tend to get better. This episode left me neutral, so there IS room to grow from here.

I was a huge fan of the show that Cleveland Show is replacing. I absolutely adored King of the Hill, and it's the second show cancelled largely due to Fox's own ineptitude (the list would have been three had they not backpedaled on Family Guy itself). When Fox wants a show to die, it schedules it in the 7-8 PM hour on Sunday nights. They did this to Futurama and they did it to King of the Hill. King of the Hill was one of the best animated comedies I've ever seen, and I can say there WILL be a contingent of viewers who, missing King of the Hill and wary of Seth MacFarlane's growing stranglehold of Fox, will be unusually cool to The Cleveland Show due to its origin and timeslot alone.

But, there's a lot of potential here, and it'll be interesting to see in which direction things go. The Cleveland Show is a nice detour from the madness that is your average episode of Family Guy, but I've yet to see evidence of how they're going to sustain this show beyond a few episodes. Yes, there are new characters to play off of. But you can't really get away with simply making the show a clone of Family Guy (nor American Dad!), and I'm not sure if Cleveland is an interesting or dynamic enough character to be the focal point of a weekly television series. Of course, they've turned simple background characters into stars of popular spin-offs before - that's the genesis of half of 1970s television right there! Still, I'm neutral at best about the ability of this show to be interesting, good, or funny long term. Consider me "cautiously optimistic."

Discuss the show after you watch it on Sunday, September 27 on our message board.

ION Television will be adding another hour of Ghost Whisperer starting Monday, Oct. 5. Ghost Whisperer currently airs Mon-Thurs at 8pm and also Wednesdays at 9pm. The series has done so-so in the ratings and is not doing as well as Criminal Minds or NCIS. But still they will add another airing on Mon-Thurs. The new airing will be Mon-Thurs at 7pm, so it will now air back-to-back on Mon-Thurs from 7-9pm, and yes Wednesdays it will be a triple shot from 7-10pm. Ghost Whisperer at 7pm will be replacing Reba, which will move to 4-5pm, as we mentioned. So Reba won't get to air for two hours after all.
Anyway, as for Ghost Whisperer, if this doesn't help its ratings, I can see ION removing the 8pm hour and airing something else.
View our full ION Television October 2009 schedule.
Pavan -- SitcomsOnline.com at 12:00 PM
Share
‹
›
Home
View web version