Start spreading the news, we're bringing you another special Sunday mini-DVD review! If you are looking for our weekly sitcom ratings, you'll still find that today, but it will be below this. Today we take a look at CBS DVD/Paramount's CSI NY: The Complete Third Season. CSI NY, the third incarnation of the CSI: Crime Scene Investigation franchise and the spin-off of CSI: Miami, is a crime drama about forensic investigators who use high-tech science to follow the evidence and solve crimes in The Big Apple. See my mini-DVD review of CSI NY: The Complete Third Season: 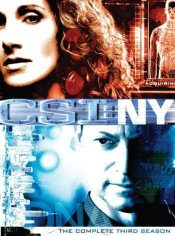 CSI NY: The Complete Third Season (CBS DVD/Paramount, $64.99) - The crimes are more brutal. The evidence is more baffling. And every killer wants to get away with murder. This season, Detective Mac Taylor (Gary Sinise) and his dedicated Forensics Team must fight harder than ever for the truth. CSI: NY Season 3 takes the drama and danger to the next level as the brilliant criminalists risk everything in the quest for justice.

This 6-disc set contains all 24 episodes of the third (2006-07) season. The episodes are presented in Anamorphic Widescreen (1.78:1) with Dolby Digital Digital 5.1 Surround or Spanish Stereo. It has a running time of 16 hours, 59 minutes. Notable season 3 guest stars included Edward Furlong, The Suicide Girls, Stacy Haiduk, Sasha Cohen, Marlee Matlin, Judd Nelson, Criss Angel, Joey Lawrence, Amy Davidson, John McEnroe and Nelly Furtado. Packaging is very attractive and similar to what they used for the second season. The embossed, holofoil outer slipcase features a photo of Melina Kanakaredes and Gary Sinise and the show logo. The inside case is in a book format that you can clip through to get to the discs. There are four clear trays that hold the discs. Two of the trays are double-sided. Inside the case, there is a content locator that lists the episodes and special features by disc. Each disc features the show logo, two different cast members and the episode titles.

Once again, the menus are very stylish and easy to navigate. A series of video clips leads to the animated anamorphic widescreen menus. Some of composer Bill Brown's great music is played in the background. At the bottom of the screen, there are options for "Episode Selection," "Set Up," and "Previews" (only on disc 1). The featurettes are also listed on their respective disc. There is no notation on the menus of which episodes have audio commentaries. You have to select an episode and play the commentary from there. On the Set Up Menu, you can choose either the Dolby Digital 5.1 Surround or Español. Closed captioning is available for all of the episodes. As you would expect from such a recent show, the video and audio quality is outstanding. Like all of the other CSI shows, it is incredbily well shot and lit. While most of it is shot in Los Angeles, the exterior shots of the city really enhance the show. They even occasionally shoot some scenes on location in New York. The episodes are presented in the order of their original airdates. Quite a bit of a music is used in the series. Fortunately, there is nothing on the packaging to indicate that any of it had to be replaced. The running times vary greatly from 41 to 44 minutes in length, but that is how they originally aired.

Another decent amount and mix of special features are included on this set. There are 4 audio commentaries available on the first three discs. Four featurettes are spread out on discs 1, 2, 3 and 6. Discs 4 and 5 feature only the episodes. Unfortunately, I haven't had a chance to listen to any of the commentaries yet, but I'm sure they offer a lot interesting behind-the-scenes and trivia like last season's commentaries. There is one less commentary on this set than in season 2. It would have been great to have a few more, especially on some of the better episodes that were later in the year like the season finale. I'll break down the special features by disc.

Disc 1
Audio Commentary on "Not What It Looks Like" by Writer Pam Veasey, Writer Peter Lenkov and Director Duane Clark

Disc 1
Special Feature: "Breaking the Killer Code" (12:36) - This featurette includes interviews with CSI franchise creator Anthony E. Zuiker, Co-Founder Edoc Laundry Dawne Weisman, Writer Zachary Reiter, Melina Kanakarades, Gary Sinise, Edward Furlong, Maddy Curley, Director Anthony Hemmingway, Special Effects Make Up John Loodvin, Eddie Cahill, and Co-Founder/Art Director of Edoc Laundry Shane Small. The focus here is on the episode "Hung Out To Dry" and the character of Shane Casey. The storyline was continued in "Raising Shane." Topics covered include how they got the idea of the episode, the hidden codes in t-shirts, how they shot the scene of the headless girl hanging from the ceiling, and the design of the t-shirts. Video clips from the episode are mixed with some behind-the-scenes shots and the interviews. This was one of the most fascinating and gruesome episodes of the season.

Disc 2
Special Feature: "The Suicide Girls Rock CSI:NY" (11:34) - This featurette includes interviews with Missy Suicide, Fractal Suicide, Zoli Suicide, Razzi Suicide, Sawa Suicide, Nixon Suicide, Razzi Suicide, Sawa Suicide, Al Suicide, Amina Munster, Anthony E. Zuiker, Director Scott Lautanen, Asst. Director Lawrence, M. Wagner, Allison Miller (Omen) and Tattoo Artist Tim Kern. They appeared in the episode "Oedipus Hex." Topics include intros/profiles of the Suicide Girls, the production of the episode, and the shooting of the scene where the blood falls on them on stage. There are a few nearly nude photos of the girls. There is a disclaimer at the start of the special featurette that some material may not be suitable for all viewers.

Disc 3
Special Feature: "The Making of 'Silent Night'" (8:25) - This featurette includes interviews with Anthony E. Zuiker, Sasha Cohen, Marlee Matlin, Co-Writer Samantha Humphrey, Melina Kanakaredes, Carmine Giovinazzo, Gary Sinise, Eddie Cahill and Hill Harper. They talk about casting Sasha Cohen, working with the signing actors, and the production of the episode. One of the cast members identifed this episode as one of their favorites. Sasha Cohen was very good in her first episodic television appearance. She will have a bright future, as she continues to gain experience.

Disc 6
Special Feature: "Hill Harper Explores The Body Farm" - Hill Harper visits the University of Tennessee Forensic Anthropology Center. Rebecca Wilson is his tour guide. As the narrator, Hill provides some background details on the center, and then the tour begins. A number of interesting facts about the center are shown on the screen, as they move from scene to scene and discuss what they are seeing. He asks a lot interesting questionsm and the tour guide provides a lot of detail. With his job on the show, he is obviously very familiar with the terminology and this seems to be stuff that he has seen before. A disclaimer is shown before the featuette that states it contains grapic images that may not be suitable for all audiences. A lot of maggots and parts of bodies are shown in various degrees of decomposition. This isn't for the squeamish.

Previews - A number of previews for other CBS DVD releases are found on disc 1.

Finally, there is a bonus disc for the CSI: Crime Scene Investigation "Hard Evidence" PC CD-Rom game. This is a playable demo for Windows 2000/XP/Vista only. It is rated "M" for blood and gore, sexual themes and violence.

This is another solid season and release in the CSI franchise. Some stand-out episodes this season were "Hung Out To Dry," "Raising Shane," "Sleight Out of Hand," and "Snow Day." Unfortunately, there is no commentary or special feature on the season finale, "Snow Day," which is probably the most gripping and intense hour they've ever done. Although the amount of special features have decreased with every release, there is still a decent amount and all fans of the series should enjoy these well-produced featurettes. Some are a bit light-hearted like the profile of the Suicide Girls, but others are more serious in tone. Hill Harper's visit to the "Body Farm" was the most interesting to me. This just proves one thing to me that I've known for a long time. While I enjoy watching forensics shows on TV, I could never do it for a living. I have a lot of admiration for what the forensics experts do to help solve crimes. Watch the fourth season of CSI: NY on Wednesday nights on CBS at 10PM ET/PT!

To purchase the DVD, click below and help support SitcomsOnline.com:
Amazon.com

Summing it up. Two and a Half Men, The Office, Big Bang Theory, Cavemen, and Carpoolers were impressive for the week. Everything else was OK (such as Rules of Engagement, How I Met Your Mother) or just plain old terrible (Aliens in America).
Pavan -- SitcomsOnline.com at 5:35 PM
Share
‹
›
Home
View web version