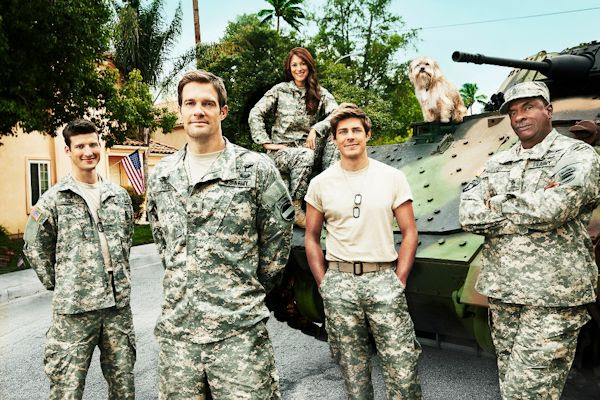 Enlisted is a new workplace comedy centered around a slightly different kind of workplace - the Army. Created by Kevin Biegel (Cougar Town, Scrubs), the show follows Pete Hill after he is booted from the front line and sent to supervise a troop of rejected misfits - a troop that happens to include his two brothers. The show follows Pete's experiences as he attempts to juggle his new troop while repairing his relationship with his brothers.

Geoff Stults (Pete Hill) is known for his television work on shows such as 7th Heaven, October Road, The Finder, Happy Town and Ben and Kate. He has also starred in several movies, including The Break-Up, She's Out of my League and Wedding Crashers.

Chris Lowell (Derrick Hill) is best known for his role as Piz on Veronica Mars. He also starred as William "Dell" Parker on both Grey's Anatomy (guest star) and its spin-off Private Practice (series regular). He also co-starred on the award-winning film The Help.


Parker Young (Randy Hill) is best known as Ryan Shay on Suburgatory. He has also guest starred on shows such as CSI: NY, Mad Men, and Jane By Design. He was also a former model. He recently starred in the TV movie Killer Reality.

Keith David (Donald Cody) is known for his roles in films such as Crash, There's Something About Mary, Barbershop, and Men At Work. He is also well-known for his voiceover work in video games including the Halo and Transformers series, in movies such as The Princess and the Frog, and in the animated series Adventure Time.

Angelique Cabral (Jill Perez) has done extensive work on soap operas, including The Guiding Light, All My Children, and One Life to Live. She has also guest starred on comedies such as Two and a Half Men, Happy Endings, and Don't Trust the B---- in Apartment 23.

In the premiere episode of Enlisted, Staff Sergeant Pete Hill is booted to Fort McGee, the post where his two younger brothers - Corporal Derrick Hill and Private Randy Hill are stationed. Now, as their platoon sergeant, Pete must serve both as big brother and military boss. Between clean-up duty at a parade, human-grease-bowling and assorted soldierly pranks, they will inadvertently discover the key to strengthening their long-lost childhood bonds.

The military has to be a fairly hard thing to write a sitcom about. Sure, it was the center of one of the most successful examples of the genre in television history, but you have to make your show funny enough that people don't notice the potentially grim topics you're dealing with, and dramatic enough that it doesn't seem like you're making light of one of the most respected institutions in American society. That's probably why you don't see too many sitcoms that deal with the armed forces. You have M*A*S*H, you have Hogan's Heroes, and you have...I don't know, Major Dad? Compared to the amount of sitcoms about, say, single people working in the big city, it's a pretty small number. It's an incredibly hard setting to sell - which is what makes it all the more impressive that Enlisted manages to sell it perfectly.

What makes Enlisted work so well is how effortless it all seems. The show doesn't bother trying to introduce us to its military world all that much - it just drops us right in and sets us free, to surprisingly effective results. This is possible because the show, even in this early stage, already knows its setting, its characters and its identity remarkably well. There are far less growing pains than there are in most comedy pilots - the characters feel well-developed already (although they develop even more in the shows' excellent second episode), and the character dynamics and central conflict of the show are both clear and powerful by the end of the episode. This also trickles down to the humor, which feels surprisingly natural through-out the entire pilot. Enlisted is a goofy show with a lot of old-school broad humor, but it also manages to mix in the clever, snappy writing that has become a staple in modern single-camera sitcoms and create a comic identity that already feels fully-formed and unique.

But perhaps the greatest strength of Enlisted is the shows' heart. It's probably necessary for a military comedy to inject some sort of heart, but the pathos in Enlisted has actual depth that stems believably from its characters. Yes, this is mostly a silly comedy, but it's a silly comedy that wants to be something just a bit more than that, and the fact that it's already succeeding this early in its run is an incredibly promising sign. Add that to the shows' strong sense of humor and well-developed characters, and it becomes clear that Enlisted is one of the seasons' best comedies.


Enlisted has the potential to be a real gem of a show. The writing is strong, the characters are already fairly well-developed, and the humor is mostly on-point. Add all of that to the fact that the show has a clear and dedicated purpose, and you have one of the seasons' best new comedies. Unfortunately, Enlisted may be a bit of a diamond in the rough - Fox is burying it on Friday nights, a perplexing move for such a promising comedy. It's a shame to see a show that's already so good getting such shoddy treatment, so hopefully Fox is kind to the show in its terrible timeslot and gives it some time to prove itself. If it does, we could have a really great show on our hands.

Final Numbers (out of 5 stars):