New Original Sitcom Coming to TBS This Summer; Reimagine That! Interviews Bronson Pinchot from Perfect Strangers About His New Series

TBS has given the greenlight to the new multi-camera comedy series Sullivan and Son, starring popular comedian Steve Byrne and executive-produced by Vince Vaughn (The Break-Up), Peter Billingsley and showrunner Rob Long (Cheers). Byrne also serves as producer on the series, which comes to TBS from Vaughn's Wild West Picture Show Productions, in association with Warner Horizon Television. The pilot was co-written by Byrne and Long, with Ted Wass (Soap, Blossom) directing. TBS has ordered 10 episodes of the series, which is slated to premiere this summer. They ordered it to pilot in October, as we mentioned, so it went well and now will be a series!
Sullivan and Son takes place in a popular and legendary neighborhood bar in a working-class neighborhood in Pittsburgh, Penn. Filled with locals and regulars, Sullivan & Son is the unofficial "town hall" to the neighborhood. As the series opens, Steve Sullivan (Byrne) is a successful corporate attorney from New York who brings his girlfriend, Ashley (guest star Brooke Lyons - 2 Broke Girls) for a visit just as his Irish-American father, Jack Sullivan (Dan Lauria - The Wonder Years), and Korean mother, Ok Cha (Jodi Long), are preparing to sell the bar and retire. Upon arrival, Steve reconnects with his best friend, Owen (Owen Benjamin); gets accosted by his long-suffering, under-appreciated younger sister, Susan (Vivian Bang); endures offensive comments from gruff barfly Hank (Brian Doyle Murray - Saturday Night Live); and gets hit on by tipsy cougar Carol (Christine Ebersole - Royal Pains). He even feels a rekindled romantic spark with his former sweetheart, Melanie (Valerie Azlynn). It doesn't take Steve long to realize that what he really wants out of life is to return to the old neighborhood and take over Sullivan & Son, even if it means giving up a lavish Manhattan lifestyle with the gorgeous Ashley. And so begins Steve's quest for a more meaningful and rewarding life behind the bar.
In addition to Sullivan and Son, TBS recently announced that this summer, the network will premiere the new buddy multi-camera comedy series Men at Work, starring Danny Masterson, James Lesure, Michael Cassidy and Adam Busch, which was ordered to pilot in August, as we mentioned. 10 episodes will air. Also this year, TBS will launch The Wedding Band, a new one-hour scripted comedy series starring Brian Austin Green, Harold Perrineau, Peter Cambor and Derek Miller, Melora Hardin, Jenny Wade and Kathryn Fiore. We mentioned of the pick-up back in May. And 10 episodes of this one-hour comedy have been ordered as well. Stay with us for premiere dates for all three original TBS series! 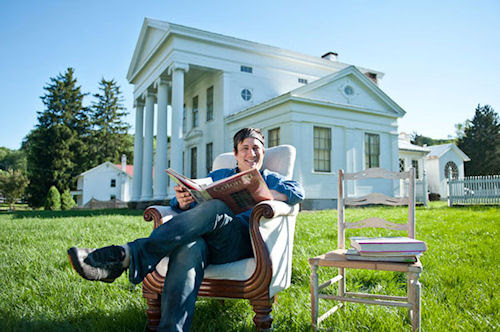 Our good pal Chris Mann as posted his latest episode of his podcast series Reimagine That! With Chris Mann and he has interviewed one of the funniest and nicest sitcom actors ever--Bronson Pinchot (Perfect Strangers). Nothing's going to stop Chris Mann now! If that's not enough, Bronson reimagines unscripted entertainment by giving his very first "inter'nude!" And no Chris is not being ridiculous! You'll have to take a listen to this for sure! TV's Balki Bartokomous -- who came back this weekend in the premiere of his new DIY home-restoration series, The Bronson Pinchot Project -- goes "au naturel" in this hysterical interview that exposes his thoughts on everything from reality TV, his love of Wizard of Oz, overcoming childhood adversity and sharing his "deeply personal and very secret" connection with Balki and Perfect Strangers fans. In addition, he shares his creative passion for renovating vintage houses and buildings, and discusses his memorable experience getting a disturbing "house dream" analyzed on Bio's Celebrity Nightmares Decoded. Since Bronson is in the middle of filming his new DIY series, the interview was cut a bit short but it is hysterical, fun and a great listen! The Bronson Pinchot Project airs every Saturday at 10:30pm on DIY!
Also earlier in the podcast, Chris gives his assessment of Suzanne Somers' recent reconciliation with Joyce DeWitt -- for more info, see his new Retroality.TV blog post (a MUST read, folks!)-- and previews his upcoming two-part interview with Little House on the Prairie star turned bestselling author and childhood abuse survivor Alison Angrim.
Finally, Reimagine That!'s resident dream weaver, Yvonne Ryba, interprets some of her fascinating "house dreams" while trying to make sense of Chris's bizarre, circa-early-Eighties dream involving TV's Janet Wood and Chrissy Snow, his front porch and a stampeding bull(!). This podcast has it all, doesn't it? So hope nothing is going to stop you now in listening to this podcast! Go and listen to episode six!