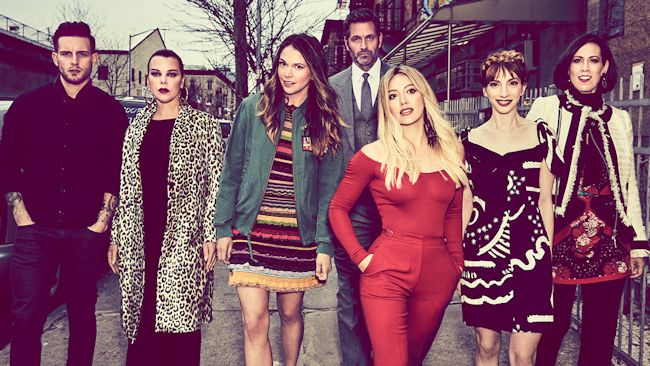 After a record-breaking season, TV Land revealed - via a unique interactive video - that its critically-acclaimed series Younger will return for season five on Tuesday, June 5, 2018 at 10pm ET/PT. Younger fans can find the highly-anticipated premiere date hidden within a sneak peek video of the new season using an interactive 360-degree interface. In the video, fans can toggle between sitting with the cast as they read a scene from the upcoming season, to standing on the Younger set, watching the finished scene. In the scene, Liza shares the good news with Kelsey that their soon-to-be-released book, Marriage Vacation, is a Reese Witherspoon Book Club pick, and Josh joins the conversation and is greeted by Liza for the first time since his wedding in Ireland.

This season, series star Miriam Shor will make her television directorial debut with an episode to air in July and, as previously announced, Charles Michael Davis (The Originals), who plays Kelsey's ex and work rival, Zane Anders, has joined the cast as a series regular. From Sex and the City creator Darren Star and starring two-time Tony(R) winner Sutton Foster, Hilary Duff, Debi Mazar, Miriam Shor, Nico Tortorella, Peter Hermann, Molly Bernard and Charles Michael Davis, Younger follows Liza, a woman who lies about her age at her job in the highly competitive world of publishing. As Liza's personal and professional lives have become irreversibly intertwined over time, keeping the secret proves more and more difficult, and she finally reveals the truth to Kelsey, her friend and partner at work. Still, Liza must keep up appearances, as she is torn between her attraction to her boss and the fact that their professional relationship was built on a lie.

Winter Storm Toby may have forced Crown Media Family Networks to cancel its Upfront event Wednesday evening, but it did not stop Bill Abbott, President & CEO, and Ed Georger, EVP of ad sales, from finding a creative way to announce the exciting projects in store for the coming broadcast season. With the help of Hallmark Channel and Hallmark Movies & Mysteries’ fan-favorites, Candace Cameron Bure and Danica McKellar, the company staged a Facebook live event at 6:30 pm EST against the backdrop of a winter wonderland in Central Park, where they announced several new programming developments for the networks.

Hallmark Movies & Mysteries, television's premiere destination for mysteries, has three new original world premiere movies. Audiences will be able to immerse themselves in new whodunits which will include Crossword Mysteries, Picture Perfect and The Chronicle Mysteries. First, Crossword Mysteries with Lacey Chabert and Brennan Elliott set to premiere in June, the movie is co-created by Will Shortz, crossword editor of The New York Times, puzzle master for NPR's "Weekend Edition Sunday," editor of Games magazine and founder and director of the American Crossword Puzzle Tournament. Picture Perfect stars Alexa and Carlos PenaVega. And The Chronicle Mysteries stars Alison Sweeney, as Roberta "Robbie" McPherson a novelist and podcaster who's researching the cold case of Gina DeSavio.

Hallmark Channel's family reality series, Meet the Peetes will return in 2019. The network has ordered a second season of the series. In Meet the Peetes, audiences follow Holly and Rodney's hectic lives as they attempt to balance raising four kids, including one with autism, running their HollyRod charity and spending time with Holly's 81-year-old mother Dolores, retired from her career as a talent manager. Their daughter Ryan is in college at New York University while RJ, their son with autism, is working for the Los Angeles Dodgers. And finally, Hallmark Channel has ordered a sixth season of the network's original, primetime drama series When Calls the Heart.