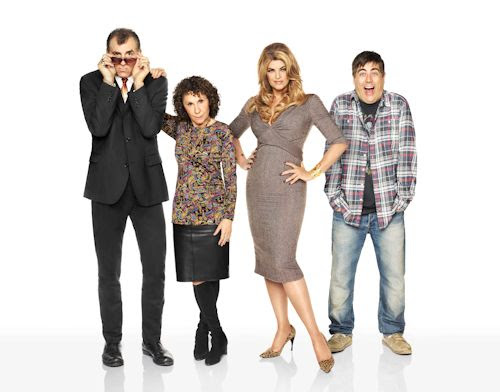 Kirstie Alley's TV Land sitcom pilot has now been picked-up to series! Multiple Emmy® Award-winner Kirstie Alley is lighting up the stage on TV Land as the network picks up Kirstie's New Show (previously titled Giant Baby), a new sitcom revolving around Alley as Broadway star Madison Banks. The sitcom reunites the actress with longtime friend and former Cheers co-star Rhea Perlman and pairs them with famed Seinfeld actor Michael Richards, both of whom have won multiple Emmy® Awards as well. Kirstie's New Show also stars Eric Petersen (Shrek: The Musical) and will premiere in Fall 2013 with 12 episodes and will join other TV Land original comedies like Hot in Cleveland, The Exes, Happily Divorced and The Soul Man.

Kirstie's New Show revolves around Madison "Maddie" Banks, a renowned Broadway star who finds her life turned upside down when Arlo (Petersen), the son she gave up at birth, suddenly appears hoping to connect after his adoptive parents have died. However, Maddie doesn't exactly see nerdy and schlubby Arlo fitting in with her luxurious lifestyle. But when Maddie's assistant and best friend, Thelma (Perlman), and outlandish driver Frank (Richards) encourage her to give Arlo a chance, Maddie is shocked to find that perhaps she has motherly instincts after all. The pilot is written and executive produced by Marco Pennette and is also executive produced by Kirstie Alley and Jason Weinberg. Larry W. Jones and Keith Cox serve as executive producers for TV Land. We hope to see her Dancing with the Stars dance partner Maksim Chmerkovskiy guest star, along with host Tom Bergeron. Stay with us for continued updates and a premiere date and time in the coming months! Go Kirstie!
See a video preview of the series as Kirstie Alley takes to the streets of New York City to announce the series:

On Tuesday, Feb. 26, the hilarious night of live comedy Worst Audition Ever is back with the Worst Breakup Ever edition for some post Valentine's Day hijinks! The show recently had a three-month/six-show run in the fall (Sept-Nov)and is back this winter and spring (Feb-April)! Let's face it, opening your heart up isn't easy and there are a lot of bumps (and humps) along the way. Come and commiserate at Worst Breakup Ever! Laugh along with an evening of real people opening their souls with hilarious stories of awkward and crushing breakups with lovers, co-workers and friends! Laugh and cringe as you relive some of your own agonizing experiences - because pain is best served funny and with cocktails. The festivities will be hosted by Deanna Pappas (The Bachelorette) and will feature real-life breakup stories from Andy Dick (NewsRadio, Less than Perfect), Sarah Collette-Wagner, Alex Fanuele, Larry Poindexter, and Danielle Thorpe! Sounds like a lot of fun and if Andy Dick is in the house, you know you'll be in store for some comedy!

Tickets are only $20 as usual and I promise you from experience that you'll have a great time! Go and order your ticket if you are in L.A. or will be in the L.A. area next Tuesday! It will be at the Cavern Club Theater on 1920 Hyperion Ave. in Los Angeles, CA. This will be the first of a three-month show, with another one slated for Tuesday, March 26, which is in the regular format of Worst Audition Ever and on Tuesday, April 30 for Worst Vacation Ever! Stay with us for info on the hosts and celebs for those two shows in the near future! But for now order your tickets for next week's show and you'll even get to meet these cool stars after the show and also the awesome producers: Christine Lakin (Step by Step, Lovin' Lakin), Alec Ledd (Internet Icon), Daniel A. Miles and Corri English (Holliston)! It's a night of fun! 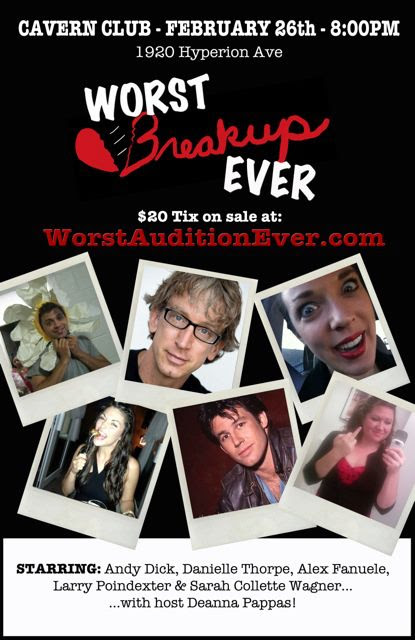