What We Do in the Shadows returns with a new episode Wednesday, May 27 at 10pm ET/PT. In "Collaboration," Nandor's old familiar from the 1970s returns to Staten Island, Guillermo leaves to serve a new master, and Nadja and Lazslo revive their musical act. Written by Sam Johnson and Chris Marcil. Directed by Yana Gorskaya. What We Do in the Shadows, based on the feature film by Jemaine Clement and Taika Waititi, documents the nightly exploits of vampire roommates Nandor (Kayvan Novak), Nadja (Natasia Demetriou), Laszlo (Matt Berry) and Colin Robinson (Mark Proksch) as they navigate the modern world of Staten Island with the help of their human familiar, Guillermo (Harvey Guillén).

Over the course of the second season, the vampires try to find their way in a world of human Super Bowl parties, internet trolls, an energy vampire who gets a promotion and becomes drunk on power and of course, all the ghosts, witches, necromancers, zombies and shadowy cloaked assassins who roam freely in the Tri-State area. Is Guillermo destined to be a vampire or a vampire hunter? Or maybe just a familiar for the rest of his life? 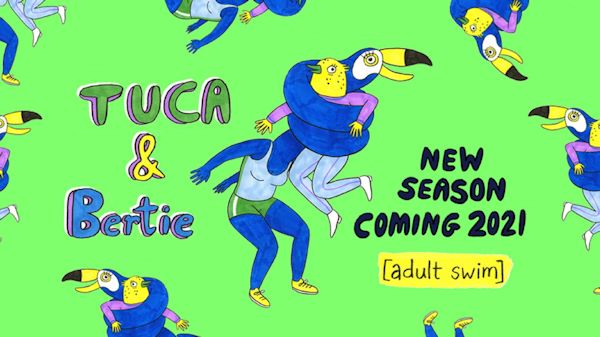 Adult Swim announced the pick-up of the popular animated comedy series Tuca & Bertie by creator Lisa Hanawalt (BoJack Horseman). The network has greenlit a 10 episode second season for domestic release, with the option for more. The animated series is a comedy about bird besties who live in the same apartment building: Tuca (Tiffany Haddish), a cocky, care-free toucan, Bertie (Ali Wong), an anxious, daydreaming song thrush, and Bertie's boyfriend, Speckle (Steven Yeun), a jovial, optimistic robin. Tuca & Bertie is created and executive produced by Hanawalt, with Raphael Bob-Waksberg, Noel Bright, Steven A. Cohen, Haddish, and Wong also serving as executive producers, The series is produced by Michael Eisner's The Tornante Company and the animation will be done at Shadowmachine. ﻿