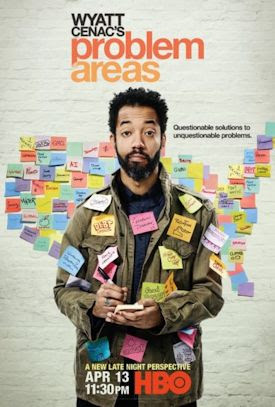 Next month, HBO launches the late-night docu-series Wyatt Cenac's Problem Areas, which follows the Emmy(R) and WGA Award-winning comedian and writer as he explores America's most pressing issues. Kicking off its ten-episode season Friday, April 13 (11:30 p.m.-midnight ET/PT), the show is the latest addition to the network's slate of late-night talk/comedy series, joining Real Time with Bill Maher and Last Week Tonight with John Oliver.

Cenac, a longtime correspondent for The Daily Show, examines a wide range of social and cultural problems facing Americans in the show, which will feature documentary-style field reports that serve as the focal point of each episode. These segments will take him around the country, from suburban Minneapolis to downtown Cincinnati to rural Texas, as he investigates systemic issues from his unique perspective. Cenac will also tackle more benign problems facing Americans, offering comedic solutions to everyday inconveniences. In addition, Wyatt Cenac's Problem Areas will feature in-studio commentary on current events, addressing issues and engaging the audience to keep the conversation going through social media.


Welcome back to the sprawling Southern California suburb of Santa Clarita, where the weather is good and the undead are... still adjusting to life among the living. Watch Sheila, Joel and Abby Hammond continue to navigate the murky waters of zombie-ism in this all-new trailer below for Santa Clarita Diet Season 2, launching Friday, March 23 globally on Netflix.

In Santa Clarita Diet, Joel (Timothy Olyphant) and Sheila (Drew Barrymore) are husband and wife realtors leading vaguely discontented lives in the L.A. suburb of Santa Clarita with their teenaged daughter Abby (Liv Hewson), until Sheila goes through a dramatic change sending their lives down a road of death and destruction...but in a good way. Picking up right where we left off, Season 2 of Santa Clarita Diet finds the Hammonds trying to adapt to Sheila's now-advanced undead state -- even though she's desperately working to hold on to her suburban lifestyle and not be defined as just another monster. Unfortunately -- while the family has become markedly better at murder -- the number of missing people in Santa Clarita is starting to pile up and it's no longer going unnoticed. Meanwhile, the Hammonds are chasing the source of the virus so they can stop it from spreading and save humanity -- which seems important. Through it all, Sheila and Joel are grounded by their unconditional love for one another. Sure, being undead -- or loving someone who is -- isn't always easy, but don't all relationships have their challenges?