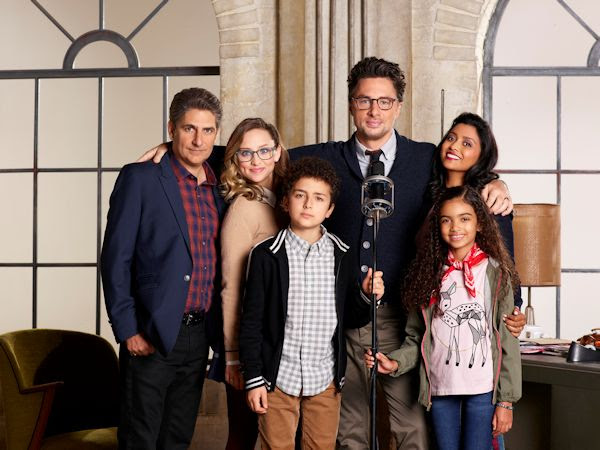 Based on Alex Blumberg's successful podcast StartUp, comedy series Alex, Inc. is all about the things that happen – the good, the bad and the ugly – when a journalist and family man quits his job to start his own company. He quickly discovers it's going to be a lot harder than he thought. Alex Schuman is a successful radio producer with a whip-smart, public defender wife, Meheroon, (aka "Rooni") and two confident, quirky children, Ben and Soraya. After years of making the kind of content that brings no creative fulfilment, in what most would consider an early mid-life crisis, Alex decides to risk everything – including his savings – to start his own business. Armed only with the help of his overenthusiastic producer, Deirdre, and his fast-talking, unemployed second cousin, Eddie, Alex navigates the crazy world of start-ups while trying to keep his marriage and family a priority.

Zach Braff (Alex) is one a New Jersey native and one of his most notable characters is that of Dr. John "J.D." Dorian on the beloved television series Scrubs. During the half-hour comedy's nine-year run, Braff earned a Primetime Emmy® and three consecutive Golden Globe nominations (2005-07) for his starring role. Scrubs also received numerous Emmy nominations for Best Comedy Series and Best Comedy Writing. In addition to directing seven episodes of Scrubs (including the show's landmark 100th episode), Braff made his feature film debut behind the camera as the director and writer of his original comedy-drama, Garden State, in which he also starred. Braff shot the coming-of-age film in his home state for a budget of $2.5 million, resulting in a $5 million unprecedented sale to two studios, Fox Searchlight and Miramax, during its premiere at the 2004 Sundance Film Festival.

Michael Imperioli (Eddie) is best known for his starring role as Christopher Moltisanti in the acclaimed TV series The Sopranos, which earned him a Best Supporting Actor Emmy® Award. He also wrote five episodes of the show. He has also starred in TV series such as Detroit 1-8-7 and Life on Mars, both on ABC. In addition, he was the co-screenwriter of the film Summer of Sam, directed by Spike Lee. Imperioli has appeared in six of Lee's films and has also acted in films by Martin Scorsese, Abel Ferrara, Walter Hill, Peter Jackson and the Hughes brothers.


Tiya Sircar (Rooni) has recently been seen in the NBC comedy The Good Place, with Entertainment Weekly recently dubbing her the series "scene stealer." She appears in the critically acclaimed series opposite Kristen Bell and Ted Danson in multiple shifting roles, from an altruistic human rights lawyer to a power-hungry demon. In the wake of recent guest roles on such series as Master of None and The Mindy Project, Sircar has also exercised her comedic and dramatic chops on The Witches of East End, The Vampire Diaries, The Crazy Ones, Hannah Montana and The Suite Life on Deck.

Elisha Henig (Ben) fell in love with acting after taking an acting class at the age of 8, and made his debut performance as Richard the Third at the end-of-class demo. At the age of 10, he started appearing in television roles, including guest appearances on Grey's Anatomy, Rizzoli & Isles, Code Black, Transparent and Mr. Robot.

Audyssie James (Soraya) started acting at the age of 6 with a guest-starring role on Sesame Street. She also has done scores of commercials, including three with her father, Antquon. Multi-ethnic, she was born to Simone and Antquon James and has a younger sister, Aella.

With the help of wife Rooni and their children, Alex Schuman quits his prominent job to start his own podcast company telling real stories that matter. He hires his cousin Eddie and former producer, Deirdre, to help achieve his dream. Meanwhile, Ben performs magic at the school talent show which teaches Alex an important lesson about his future. Chris Sacca appears as himself. The episode was written by Matt Tarses and directed by Zach Braff.

The first three production episodes were available to us for review: "The Unfair Advantage," "The Wax Museum" and "The Mother In-Law." The first two are airing first March 28 and April 4. The latter doesn't have an airdate yet. I was quite surprised how good this show is as I watched each episode. The premiere episode was a lot of set-up and it wasn't as good (or funny) as the other two episodes I saw. But it got better after that! Zach Braff really shines in this series and he still has that Scrubs charm and quirky fun. He brings his family life to this show along with starting a new business. Both aspects of the show are solid. His family - the wife and two kids are really good in this. The wife is of Indian descent, so that is refreshing to see on broadcast television, especially not in a traditional family. It's something unique at least. The children are obviously of mixed race, with the son looking more white, and the daughter looking more Indian.

His work life is also interesting. He quits his high profile job and ends up creating a start-up business about a podcast. Seems random, but, hey it works. He teams up with his cousin Eddie, played by Michael Imperioli, and Deidre, who definitely has a thing for Alex. It's a funny three person team, as Deidre brings a lot of laughs and Eddie plays the straight guy to Alex. I think this is Imperioli's first regular sitcom and he certainly plays it well. He is always good in everything he does and is a great actor. By the time I got to the third episode, "The Mother In-Law," it was full on laughs and heart. Alex's mother in-law was very funny and she played off well with Alex. It has the ABC family brand and charm to it.


This is a solid series. It has a great leading man in Zach Braff, who is a proven star for comedy. It has a great supporting cast, both in Alex's home life and workplace. The series should fit in very well sandwiched in between ABC's top comedies: The Goldbergs and Modern Family. Sophomore comedy Speechless is a more proven and funnier show, but Alex, Inc. is just getting started and it has a good shot, I think. It just fits ABC's comedy brand very well and of the two new ABC comedies premiering this week, this is the better one. With The Middle ending this season, Alex, Inc. has a better shot of returning next season, if it performs. Because the quality is pretty good and it gets funnier as the episodes go on. Give Alex, Inc. a chance, because it has the recipe of comedy success.

Final Numbers (out of 5 stars):


Finally, this is it! One Day at a Time has been renewed for Season 3! Netflix has ordered 13 half-hour episodes, coming in 2019. Returning cast includes Justina Machado, Rita Moreno, Todd Grinnell, Stephen Toblowsky, Isabella Gomez and Marcel Ruiz. Executive Producers include Norman Lear, co-creators/co-showrunners Gloria Calderon Kellett and Mike Royce, Michael Garcia and Brent Miller. Produced by Sony Pictures Television for Netflix. A reimagining of the iconic Norman Lear sitcom, One Day at a Time is a hilarious and heartfelt comedy that follows three generations of a Cuban-American family sometimes-reluctantly cohabitating and navigating the ups and downs of life. A newly-single mom and military veteran journeys through the triumphs and tribulations that come with raising two strong-willed, mega-millennial children, all the while enlisting the "help" of her old-school mother and her building manager-turned-invaluable confidante. Through a contemporary lens, One Day at a Time offers a glimpse at what life looks like, in good times and bad -- and how those around you somehow make it all worthwhile.