CBS was up next at the TCA Winter 2015 Press Tour yesterday and we have the full scoop! Showtime was also up and we will detail some of their moves as well, but first CBS announced that the hit freshman dramas NCIS: New Orleans, Madam Secretary and Scorpion have all been renewed for the 2015-2016 broadcast season. No decision has been announced for freshman sitcom The McCarthys. In other news, CBS also announced that Late Show with Stephen Cobert will debut Tuesday, Sept. 8 at 11:35PM ET/PT from the historic Ed Sullivan Theater in New York City. Colbert was named David Letterman's successor on April 10, 2014. As previously announced, Letterman will host his final broadcast on Wednesday, May 20, 2015 (the last night of the 2014-15 TV season).

Onto the Showtime news, Hot off its season five premiere this past Sunday, Showtime has ordered a sixth season of Shameless. The series received a 12-episode order, with production on season six starting later this year. The network will pick up the new comedy series Happyish starring Oscar(R) and Golden Globe(R) nominee Steve Coogan, Kathryn Hahn and Emmy(R) Award winner and Golden Globe nominee Bradley Whitford. The series is a comedic, soul-searching examination of our pursuit of happiness and why it continues to be so elusive. Happyish, which shoots in New York, will premiere on Sunday, April 26 at 9:30pm ET/PT, immediately following Nurse Jackie airing at 9pm, and followed by the premiere of the second season of the Showtime drama series Penny Dreadful at 10pm. And the highly touted pilot gets bigger. Rounding out the casting of the new Showtime comedy pilot Roadies, rapper and actor Colson "MGK" Baker (aka Machine Gun Kelly) is set to star in the role of Jesse, Kelly Ann's (Imogen Poots) big hearted twin brother, who thrives around guitars and espresso machines. Roadies follows the day-to-day life of a successful rock tour as seen through the eyes of music's unsung heroes - the crew members who get the show on the road. Luke Wilson, five-time Emmy(R) Award nominee Christina Hendricks (Mad Men), Imogen Poots (The Look of Love), Rafe Spall (One Day), Peter Cambor (NCIS: Los Angeles) and Academy Award(R) nominee Keisha Castle-Hughes (Whale Rider) were previously announced as stars of the ensemble cast. The one-hour comedy pilot will begin production in Vancouver later this week.

And Twin Peaks is back 25 years later...in 2016! Golden Globe winner and Emmy(R) Award nominee Kyle MacLachlan will reprise his role as FBI Agent Dale Cooper when the critically-acclaimed, ground breaking television phenomenon Twin Peaks returns as a new limited series on Showtime. Series creators and executive producers David Lynch and Mark Frost are on board to write and produce all nine episodes of the limited series. Four-time Oscar(R) nominee David Lynch will direct every episode. Twin Peaks will go into production in 2015 to air on the network in 2016, marking the 25th anniversary of when the program last aired. Set in the present day, Twin Peaks will continue the lore of the original series, providing long-awaited answers for the series' passionate fan base. The announcement was made today by Showtime Networks President David Nevins and MacLachlan at the Television Critics Association's annual Winter Press Tour. 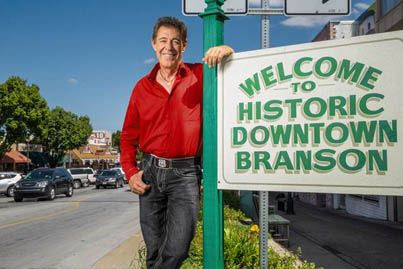 And here's a story! From the network that airs Off the Map With Shannen & Holly starring Shannen Doherty and Holly Marie Combs (Charmed), brings you another fun series! Hollywood heads to Missouri in GAC's (Great American Country) newest original series A Very Barry Branson. The series, featuring television's most reliable big brother Barry Williams ("Greg" from The Brady Bunch) as he launches a 1970s musical variety show in the Show-Me State, premieres Thursday, Feb. 5, at 9pm ET/PT. In A Very Barry Branson, Barry learns that to create a successful and fun live music show that harkens back to the era of The Brady Bunch, bright-colored leisure suits, roller skating and vinyl records, this Hollywood fixture has to do more than just show up and sing - he has to become a bona fide Bransonite. Eager to win over the tightknit community, Barry befriends Branson's popular music group The Haygoods, who soon have the television icon cliff jumping at the lake, jet-packing from the balcony of the theater, and learning to trout fish - a task that proves just what a fish out of water this city boy is. From performing at timeshare mixers to auditioning a slew of local performers including a break-dancing granny and a man who plays a bike pump, Barry pulls out all the stops - even arranging a long-awaited reunion with his Brady Bunch sister Maureen McCormick, whom he takes on a Branson tour. Marcia, Marcia, Marcia!