TV Guide Asks for Favorite Comedy; Episodic Review: Raising Hope - "The Old Girl" and Mindy Project - "The One That Got Away" Airing Tonight on Fox

Selected by TV Guide Magazine's Editors, the 2012 Fan Favorite nominees in the "Favorite Comedy" category are 2 Broke Girls, Community, Cougar Town, Girls, Glee, Happy Endings, Modern Family, New Girl, The Big Bang Theory, and The Middle. Who will you choose? You can make a difference. The SitcomsOnline pick for Favorite Comedy goes to Modern Family (though 2-3 others are tempting, too). Go and vote and your favorite comedy could make the cover! 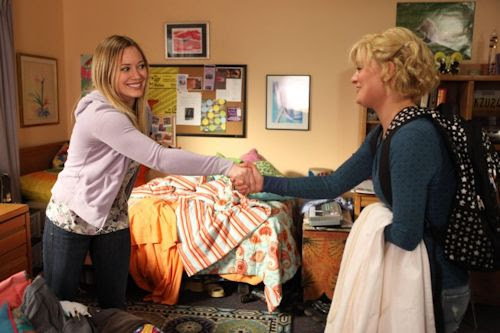 On the next...Raising Hope:
By: Todd

Fox's Tuesday sitcom starring Martha Plimpton airs Tuesday nights at 8:00pm & 8:30pm and we have just watched the episode that airs tonight (Feb. 26) at 8:30pm. Hilary Duff guest stars! In the episode airing tonight, "The Old Girl," Sabrina (Shannon Woodward) is excited to introduce her new friend, Rachel (guest star Hilary Duff), to the family, but Virginia (Martha Plimpton) and Burt (Garret Dillahunt) are shocked when she turns out to be Jimmy's (Lucas Neff) ex-girlfriend who broke his heart as a teenager.

After Hope is bitten by a cow at the Natesville petting zoo, they receive 500 pounds of beef in order to avoid a messy lawsuit. The family has nothing but meat for the next week. Sabrina shows them a photo of her new friend, Rachel. Everybody is shocked to see that she is Jimmy's ex-girlfriend. Jimmy had met her at college when he was 18. They meet every single weekend, but the relationship is eventually ended by Rachel. Jimmy, Virginia and Burt later sing Ain't No Sunshine in a breakup video montage. Sabrina invites Rachel over for dinner. Jimmy reads a letter that he had written to Rachel seven years ago. Rachel tells him that Virginia and Burt are the whole reason they broke up. In flashback scenes, a young Jimmy is shown by rejected by a girl at a grocery store. Young Jimmy also sings Ain't No Sunshine. Many years later and in more flashback scenes, Virginia and Burt go to the college to meet Rachel. They don't want to see Jimmy get his heart broken again, so they try to get Richard interested in Rachel. Richard, however, has his sights set on somebody else. Will Rachel stay for the dinner or will she go? Tune in to find out.
It's an all-new hour of Raising Hope tonight. Only the second episode was available for review. Hilary Duff hasn't appeared in any episodic series in the last few years, so it's nice to see her return to television with this funny guest appearance. This episode is Virginia and Burt centric and offers plenty of flashback scenes. It's always fun to see the scenes when Virginia and Burt were younger and even more insane. Trace Garcia, creator Greg Garcia's son, does a fine job as the five-year-old Jimmy and even sings like the adult Jimmy. I liked how they set up the present day and flashback breakup montages the same way. Their flashback scenes are always very creative. It's a pretty enjoyable episode overall. The highlights are the Virginia and Burt flashback scenes at the college and the Ain't No Sunshine renditions. I'm looking forward to the My Name Is Earl reunion with Jason Lee, Jaime Pressly, Ethan Suplee, Nadine Velazquez and Eddie Steeples tonight in the first episode ("Making the Band") airing at 8:00pm. That would be my pick of the night. B 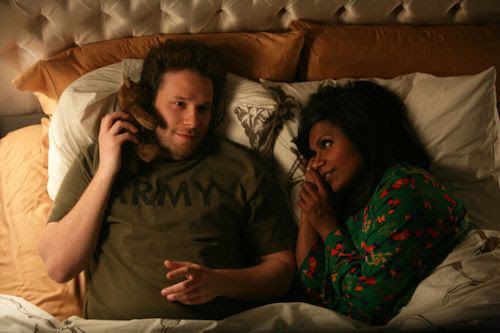 On the next...The Mindy Project:
By: Skees

Fox's Tuesday night comedy starring Mindy Kaling airs Tuesday nights at 9:30pm immediately following New Girl and we have just watched the next episode that airs tonight (Feb. 26). Seth Rogen guest stars!. In the episode airing tonight, "The One That Got Away," Mindy (Mindy Kaling) reunites with her "first kiss," Sam (guest star Seth Rogen) and the two reminisce about their time at Jewish summer camp, and soon rekindle the sparks of their teen romance.

Mindy has reunited with an old flame once again (surprise?) when she meets up with Sam (played by guest star Seth Rogen). Unlike many of her old flames, though, Sam goes pretty far back... all the way back to when Mindy was at Jewish summer camp (don't ask). It was at this summer camp where Mindy first met Sam and had her first kiss. Of course, once summer was over, she was headed back home and Sam was out of her life. That is, until Sam returns home from his duty in the Army (wearing an Army t-shirt that Mindy is convinced that he picked up at hipster-chic Urban Outfitters) and meets up with Mindy. Once she finds out that Sam is about to be deployed again, she becomes a bit reluctant to attempt to rekindle the relationship, but as she begins to fall for him once again, she considers doing whatever it takes to keep him from leaving her life... literally anything. 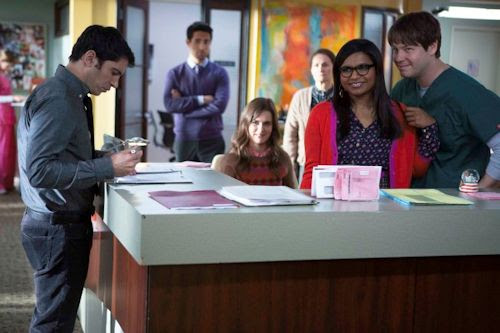 Once again, this is yet another predictable episode about Mindy falling in love... again. These episodes are good once in a while, but the whole theme just continues to wear a bit thin in my opinion. I enjoyed seeing Rogen make an appearance in the episode, but much like other guest stars who've appeared in previous episodes, it seems like a generic script was already written for anybody without actually using Rogen's talents and creating a character around him. I have been growing to like this series, but too many of these "old boyfriend back in Mindy's life" stories can wear thin very quickly. Regardless, though, this wasn't a bad story, and I loved the ploy that Mindy tried to undertake to keep this boyfriend around... I'd just rather these episodes less often, and also to see big-name male guest stars be somebody other than a love-interest for Mindy. B-
Pavan -- SitcomsOnline.com at 12:00 PM
Share
‹
›
Home
View web version