New Classic TV Block on The Hub, Where YOU Rule; Sitcom Stars on Talk Shows (Week of February 25, 2013) 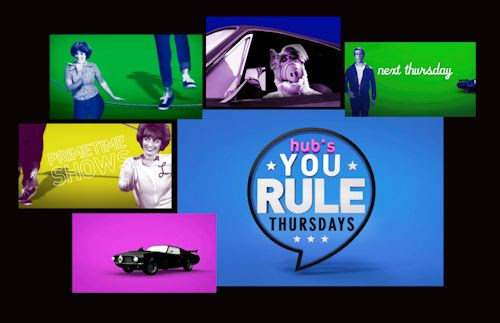 The Hub TV Network has announced "You Rule Thursdays," a weekly programming block giving viewers a chance to remotely control the shows they watch on the network during the Thursday primetime hours of 9pm–midnight ET (with an encore from 3-6am). On Thursday, February 28, at 9pm ET, following a special programming block featuring past Academy Awards® winners in popular Hub sitcoms, viewers will go to http://hubworld.com/YouRule to vote on the shows that will air the following Thursday (March 7). Each week of "You Rule Thursdays" will be themed with a different common element that links Hub shows, including Mork and Mindy, Happy Days, The Facts of Life, Family Ties, Laverne & Shirley and more. Selected themes for the first few weeks of the new "You Rule Thursdays" are as follows:

Fans can go to http://hubworld.com/YouRule to view select clips, preview artwork, and cast their votes. Viewers can vote as often as they like. The voting results in all categories will be revealed on-air during the "You Rule Thursdays," programming block from 9pm-midnight ET, so you'll have to tune in! Before "You Rule Thursdays" begins, the block will feature "Favorite Sitcom Episodes Featuring Oscar® Winning Guest Stars" chosen by The Hub! The Facts of Life kicks it off with two episodes with George Clooney from 9-10pm ("Into the Frying Pan" and "The Reunion"). Then at 10pm, Tom Hanks guest stars on the two-part Family Ties episode "The Fugitive." At 11pm, we have another episode of The Facts of Life, this time with guest star Helen Hunt on the classic first season episode "Dope." And finally at 11:30pm, Anjelica Huston guest stars on the Laverne & Shirley episode "An Affair to Forget." The block will be preceded by an hour of ALF every Thursday from 8-9pm (encores 2-3am). "Ha!"

Stay with us for continued updates and let's hope The Hub has some tricks up their sleeves for the selection of shows we can choose from. You could probably expect all of the sitcoms that they air like the ones mentioned above and others like Sabrina the Teenage Witch, Doogie Howser M.D. and maybe even The Wonder Years again? You'll have to stay tuned! It's make your own classic TV on The Hub!