The King of Queens Comes to TV Land, As Spike TV Drops It; Reimagine That! with Chris Mann Episode 2 With Guest Star Joyce DeWitt 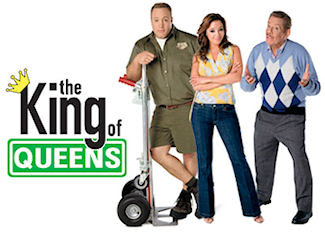 The King of Queens is heading to TV Land! The Kevin James-led CBS series will air every night from 11pm-1am ET/PT starting tonight, right after a block of Everybody Loves Raymond, another former CBS sitcom (Actually, TV Land quietly premiered the sitcom last night in the 12 midnight hour). How did TV Land quickly get the series? Well, sister network Spike TV launched the series earlier this month, but as of Thursday, they removed the series completely due to low ratings. So TV Land has obtained the series from sister network Spike TV. Maybe this will be a better fit? The King of Queens will continue to air on TBS (and local syndication), as that is another deal, so TV Land and TBS will share the rights.

So what does this mean for the rest of the TV Land schedule? Just some time changes, but we want to let you know that Scrubs was quickly pulled over a week ago for a second hour of Married...with Children. TV Land will continue to air Bonanza from 8-10am (except a movie airs on Mondays). The Dick Van Dyke Show follows from 10:14am-12pm with three episodes, followed by a three-spot of Sanford & Son from 12pm-1:36pm (yes more commercials are added to fill time). The schedule continues with three more airings of Bonanza from 1:36pm-5pm. All of this so far is the same as it is now, but the 5pm hour will now be The Dick Van Dyke Show replacing an hour of M*A*S**H, but that comedy will remain in the 6pm hour. The 7pm hour was Dick Van Dyke, but now will be Married...with Children, as the '90s comedy moves from 8-10pm to 7-9pm. Then as we mentioned, Everybody Loves Raymond is moving to 9-11pm leading into new addition The King of Queens from 11pm-1am. Roseanne will now air in the 1am hour leading into The Nanny from 2am-3:12am. Slapstick comedy Three's Company will now air from 3:12am-4:22am with back-to-back airings. From 4:22am-5:27am, we get another two-episode block of Roseanne. And finally the 5:27am-6am half-hour will be an airing of The Nanny. So late nights hasn't changed much, but Roseanne, The Nanny and Three's Company sees some time changes. Boston Legal was dropped a few weeks ago. Some Friday nights (early Saturday mornings), will see Three's Company from 4:22am-6am.

As for specials and stunts, TV Land will have a week-long Hot in Cleveland marathon from November 7 through November 11 from 10pm-12am each night. That will shift King of Queens to 12-2am that week, with Raymond airing its second hour from 2-3am. As a reminder, the third season of Hot in Cleveland launches on Wednesday, Nov. 30, followed by the series premiere of The Exes -- more on these soon. Other stunts include a Roseanne Halloween marathon, as we noted before, from 1am-6am on Halloween night and 1am-5am on the night before. TV Land will present a marathon of The King of Queens on Sunday, Nov. 13 from 9pm-2am. And during the 5th Annual Overstuffed Thanksgiving, TV Land serves up four full-days of marathons featuring a delicious mix of retro and modern classics like Three's Company, The Andy Griffith Show, The Dick Van Dyke Show, Roseanne and Everybody Loves Raymond. Over the weekend (Nov. 26-27), TV Land delivers a supersized Hot in Cleveland marathon featuring every episode from the hit TV Land original series, from 9am-11pm on both days, together with exclusive tidbits from its newest original sitcom, The Exes, premiering Wednesday, November 30 at 10:30pm! We will have more details on the Overstuffed Thanksgiving marathon schedule soon! And finally, upcoming movies in October and November include Other People's Money, Ghost and The Bodyguard.
View and discuss the updated TV Land schedule, with new addition The King of Queens and these new stunts.


Earlier this month Chris Mann of Retroality.TV launched a new podcast called "Reimagine That!" and his special guest for the premiere was Joyce DeWitt of Three's Company! Well now episode two launched yesterday and Chris has part two of his interview with Joyce, along with much more! Retro pop meets forward thought as Three's Company star Joyce DeWitt, in the conclusion of her in-depth two-part interview, shares her spiritual insights, reveals her "All You Need Is Love" - inspired connection to Beatles-loving John Ritter and tells why she hasn't spoken to co-star Suzanne Somers in 30-plus years -- despite Joyce's repeated efforts to extend an olive branch. She also tells Retroality.TV editor, author and host Chris Mann her fond memories of co-stars Don Knotts, Norman Fell, Audra Lindley, Richard Kline, Priscilla Barnes, Jenilee Harrison and Ann Wedgeworth. And Joyce bares all about still being recognized for having a great pair of L'eggs.

In addition, Chris dissects the cancelation of ABC's reimagined Charlie's Angels and previews his upcoming Wellbella cover story interview with original Angel Cheryl Ladd, who speaks about the new series. And Chris breaks news about Alana Stewart and her attorneys shutting down the Facebook group "Farrah Fawcett: We Want the Truth" -- the same group that orchestrated a letter-writing campaign this summer that apparently led the California State Attorney General's office to open a reported investigation into the Stewart-helmed charitable organization The Farrah Fawcett Foundation. Finally, in the second installment of a recurring "dream weaver" segment, Chris encourages listeners reimagine their own reality with dream interpreter Yvonne Ryba.

So without further adieu, go and listen to episode two of "Reimagine That!"