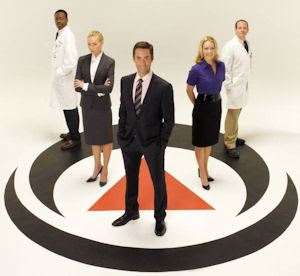 Better Off Ted is a satirical office comedy about successful good guy, Ted, who runs research and development at the morally questionable Veridian Dynamics. No achievement is too far-fetched and no invention too unorthodox for Veridian. Need cow-less meat grown in a test tube? Done. Need pumpkins that also double as weapons of mass destruction? No problem. Ted's a single dad to a seven-year-old girl, and he loves his job, but he's starting to take a closer look at the company's extremely dubious practices. Do you manufacture the best teeth whitener ever if it could also kill off all of the planet's fish? Probably not, but...
Ted's also fighting an attraction to co-worker Linda, who enjoys small acts of rebellion against Veridian (she's secretly stealing and hoarding all the company's creamer packets). But he holds back about his true feelings. He's already had his self imposed "one office affair" with überboss Veronica. Incredibly beautiful (if seemingly devoid of conscience and also emotion-free), Veronica lets nothing get in her way when it comes to serving Veridian's needs... even if it means doing something like cryogenically freezing an employee for testing purposes. And after all, the employee, research scientist Phil, survived (after he thawed out). So what if he screams like an eagle at the slightest provocation? He and his best friend, fellow research scientist Lem, are both geniuses and when they're not bickering, they're responsible for many of Veridian's miracles of weird science.

Jay Harrington (Ted) has a recurring role on Private Practice as Dr. Wyatt Lockhart and has appeared on The Inside and Coupling. Other television credits include Teri Hatcher's doctor-turned boyfiend Dr. Ron on Desperate Housewives, Ghost Whisperer, Las Vegas, The Division, The Shield, Without a Trace and the Lifetime movie Why I Wore Lipstick to My Mastectomy. His feature film credits include Partners, Whatever It Takes and Anywhere But Here. Jay is also an avid sports fan. He plays in the NBA Entertainment League and dons skates for a local hockey team.

Portia de Rossi (Veronica) has had a widely varied career, captivating audiences in both television and film. She recently starred as a fifth-season series regular on the FX popular original drama Nip/Tuck as Olivia Lord, a holistic medicine practitioner who has problematic relationships with both her girlfriend, Julia, and her out-of-control daughter. She also starred as Lindsay Bluth Funke in the critically acclaimed Fox comedy Arrested Development. The show won a Primetime Emmy Award in 2004 for Outstanding Performance by an Ensemble and was nominated for an Emmy Award in 2006 and a SAG Award in 2005. De Rossi is perhaps best known for her portrayal of enigmatic lawyer Nelle Porter on Fox's hugely successful Ally McBeal. On the big screen, she starred in Wes Craven's Cursed, opposite Christina Ricci, Chris Ver Wiel's Who is Cletis Tout?, opposite Richard Dreyfuss and Tim Allen, Paul Goldman's The Night We Called It a Day, opposite Dennis Hopper and Melanie Griffith, Wes Craven's Scream 2, Rupert Wainwright's Stigmata, Bruce Wagner's Women in Film, Noah Stern's The Invisibles and Michael Goorjians Ambition to Meaning, with Wayne Dyer.

Andrea Anders (Linda) is best known to television audiences for her roles as Nicole Allen on the sitcom The Class and as Alex Garrett in the comedy Joey. Additional television credits include Law & Order, Tru Calling, Oz and Numb3rs. Her feature film credits include the road comedy Sex Drive and The Stepford Wives.

Jonathan Slavin (Phil) has been acting steadily in recent years. After a string of "insert occupation here" guy TV roles (Flower Delivery Guy, Fish and Chips Guy, Computer Tech Guy, etc.), Slavin landed a memorable turn as "Ice Cream Guy" on Caroline in the City, and has worked in television ever since. He has appeared as a series regular on Andy Richter Controls the Universe and Union Square, and had recurring roles on My Name is Earl, Summerland, Inconceivable and Wings. Recent guest starring roles include Life, Grey's Anatomy, CSI, Ugly Betty, Friends and Bones. He has also appeared in the feature films Hard Pill, A Cinderella Story, Grand Theft Parsons, Race to Witch Mountain and My Mother's Hairdo.

Malcolm Barrett (Lem) has appeared on a number of series as either a regular or guest star, including The Bonnie Hunt Show, Kelsey Grammar Presents: The Sketch Show, Monk, Psych, Ghost Whisperer, It's Always Sunny in Philadelphia, Law & Order, Law & Order: Criminal Intent and The Sopranos. Feature film credits include My Best Friend's Girl, Hurt Locker, American Violet, The Rhythm of the Saints, King of the Jungle and Swimfan.

Isabella Acres (Rose) was born in Atlanta, where she discovered her love for acting in children's theater. Since relocating to Los Angeles she has appeared on such TV series as Monk, Hannah Montana and Jimmy Kimmel Live. She has also appeared in the recurring role of Jane's daughter on The Mentalist. Isabella has extensive voiceover credits, including the feature films Horton Hears a Who, Four Christmases, The Women and Fred Claus, and has voiced characters in the animated series Phineas and Ferb and Special Agent Oso.

I received two episodes for review. So, I will base my thoughts on the show on these two.

#1 Pilot (Airs March 18)
Ted finds out just how far Veronica's willing to go for Veridian's greater good when she charges him with convincing brilliant research scientist Phil to be cryogenically frozen for a test experiment. Phil is excited, even if best friend and research partner, Lem, is a little jealous...and Ted is more than a little worried about the long-term effects if the experiment actually goes ahead.
Guest starring are Maz Jobrani (The Knights of Prosperity) as Dr. Bhamba and Jim Lau as the screaming office worker. "Pilot" was written by Victor Fresco and directed by Mike Fresco.

#2 "Through Rose Colored HAZMAT Suits" (Airs April 1)
When the nanny calls in sick, Ted reluctantly takes daughter Rose to work, where Veronica forms a surprising (if frightening) bond with the little girl. Rose's visit to Veridian also stirs up trouble when a casual remark she makes sends Phil and Lem into a tailspin about just who has the upper hand in their work relationship. Meanwhile, Ted finds out where he stands with Linda when her ex-boyfriend comes back to town.
Guest starring are Julian Bailey as Hal, Martha Boles as Lisa, Mason Lauderdale as the little boy, Sean Christopher Davis as Jerry and Richard Fancy as Mr. Campbell. "Through Rose Colored HAZMAT Suits" was written by Justin Adler and directed by Michael Fresco.

After watching two episodes, I am pleased. The show is very smartly written and has some laugh-out-loud moments. Both Jay Harrington and Portia de Rossi as Ted and Veronica are strong leads and likable, yet de Rossi's character is a bit weird and wacky, but at the same time hilarious. Some of the stuff she says is priceless! The supporting cast includes scientists Phil and Lem, who are an excellent comedic duo. They are very funny. Also, we have co-worker Linda, who has instant chemistry with Ted...but will they get together? Or will Veronica beat Linda to it? And finally we have Rose, who is Ted's little daughter. She is smart and blends in well with Veronica, as you'll see on episode three (the second one I saw).

As for the plot of the show, it is all centered around the workplace. Both episodes I saw starts off with a one-minute presentation for Veridian Dynamics. Very cool and hilarious to start like that. Veridian Dynamics is certainly a future company. We can see that as they develop quite outrageous stuff, but it is funny. Some of the hilarious and wacky stuff they want to do are...to freeze Phil, just to see if it is possible; itchy chairs to have better production at work; and exploding pumpkins with Dr. Bhamba! If you like The Office, you'll certainly like this show. I hate that show, yet I liked this show, though. Why? There is no weird camera zooming to make this look documentary style or cheap. Plus this actually has music and background sound, unlike that show. The similarities for that show with this show so far is that this really is a good cast and ensemble. Everyone plays well off each other and Veridian Dynamics is a very fun place to work, even though they have weird ideas! It just makes it funny!

Will this series work for ABC? It will be following new episodes of Scrubs, so the young audience ABC is hoping for will certainly be there. It will air in a rather weak timeslot with the only competition really from Fox's Lie to Me and CBS's Gary Unmarried, the latter is also a comedy and ABC should have no problem beating it in 18-49. Hopefully this show surprises and at least becomes a cult hit like The Office that skews very young.

This show is very funny. It is not as crazy as say Worst Week, but is much better written and relies more on dialog. Though this show has its fair share of physical comedy as well. Having both funny dialog and physical comedy, along with a great ensemble make a recipe for a great comedy. This show has so much potential. The promos have been showcasing scenes from later episodes, so I cannot wait to see a worker jumping out of a window, and the human resources lady saying "that's gonna be some paperwork," Ted staring at Linda's butt, and Veronica making fun of the balding guy. So there are going to more fun stuff coming soon, and I cannot wait! I hope to see more of Dr. Bhamba, too. He was only in the pilot episode but will make more appearances this season. He is played by Maz Jabrini, who was on The Knights of Prosperity, which is the funniest sitcom to air in the last few years. Too bad it didn't last...but I hope and think this will. There are stuff I didn't like, such as sitcom cliches (smart daughter, sitcom romance), but who cares. We need bread and butter sitcoms to get an audience, even though this is not a traditional sitcom.

Freezing Phil, training children of Veridian Dynamics "life skills," and so much more makes this show top-notch and a must watch. Watch the premiere, and if you like it...please tune in every week as we need a new sitcom hit. And if you like the premiere but are on the fence, don't give up because episode two is even better! Portia de Rossi deserves an Emmy nomination for her work here!

Discuss the show after you watch it on Wednesday, March 18 on our message board.


Finally, if you didn't see this posted on our message board over the weekend, Lifetime made a schedule change effective today. They are replacing the afternoon movie with an extra Desperate Housewives and Wife Swap, so both of those shows will now air three in a row...12-3pm and 3-6pm. Also, in primetime, Will & Grace will be airing in the 8pm hour, while the primetime Wife Swap moves from Mondays to Fridays, 9-11pm. A movie will still air in primetime the other nights. Late nights, we now have a Reba hour at 1am replacing the late Desperate Housewives airing, followed by a Rita Rocks half-hour at 2am, five days a week. Rita Rocks won't be airing in primetime until it returns with new episodes now. No other changes are being made.
Pavan -- SitcomsOnline.com at 4:00 PM
Share
‹
›
Home
View web version