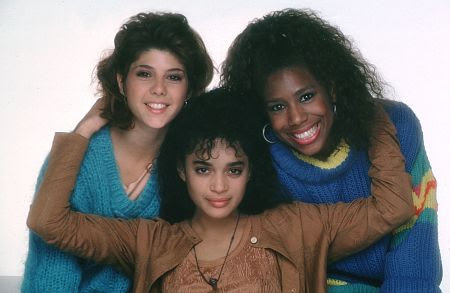 Happy Labor Day everyone! Today is Carsey-Werner DVD news day. We have a first look on the Different World (cast pictured) DVDs. Will they be edited or unedited? But first we have more information regarding The Cosby Show. We know that seasons 2-8 will be unedited, as TVShowsonDVD.com told us late last week. But I have now found out that UrbanWorks has no plans at this time at all to release a replacement for Cosby Show Season 1 with the broadcast versions. While that is too bad, but at least the rest of the series will be shown in their original form. TVShowsonDVD.com is reporting a March 2006 target for season 2 on DVD.

Moving on to the spin-off series, A Different World, UrbanWorks will be releasing all six seasons eventually. Season 1 is slated for November. Will they be the syndicated prints or the original broadcast prints is the question many fans have been asking ever since we found out that its parent show had syndicated prints for season 1. The answer is ... syndicated prints. UrbanWorks has told me that they are too far along in production to make the change, so we will have to expect syndicated prints for the series' first season. As for seasons 2-6, they will indeed use the original broadcast versions, so just like The Cosby Show, not all is lost. Personally, I liked the first season of A Different World the best, since I'm a Cosby Show fan and Lisa Bonet from The Cosby Show is in it. Bonet left the series after season one due to her real life pregnancy. She later returned to The Cosby Show.

So what about Carsey-Werner's other series that have hit DVD with edited episodes? Anchor Bay is dealing with Roseanne and 3rd Rock from the Sun, and still there is no real statement, besides what they have been e-mailing fans saying to expect the broadcast versions soon. Hopefully that means the rest of the series and a replacement for season one, but I doubt the latter. I really don't understand why Carsey-Werner didn't give the broadcast versions to UrbanWorks and Anchor Bay in the first place. Did they not realize fans would not notice?

The internet has had a fair share of rumors on C-W's other titles, some included that the 1996-2000 Cosby would be released by UrbanWorks. I asked UrbanWorks that and they told me they don't have the rights to it. So, I don't think we can expect that series on DVD soon, at least not from UrbanWorks. No information so far on the other popular C-W titles Grace Under Fire and Cybill. That '70s Show Season 3 is coming November 15 though from 20th Century FOX and Grounded for Life is coming soon from Anchor Bay.
Pavan -- SitcomsOnline.com at 11:09 AM
Share
‹
›
Home
View web version