On to scheduling news, Nick at Nite has scheduled a week-long Friends stunt for the week of March 11. The stunt will air Monday, March 11 through Friday, March 15 from 8pm-6am each night (Thursday and Friday starts at 9pm). It's a week-long event with all your favorite friends, all-night! Meanwhile, the movies on Sundays at 9pm will continue in March with National Lampoon's European Vacation this Sunday at 9. Recent movies were Ferris Bueller's Day Off and The Brady Bunch Movie. Upcoming airings are Rugrats in Paris on March 10, Scooby-Doo on March 17, and The Last Airbender on March 31. Stay with us for continued updates. NBC's freshman comedy starring Josh Gad airs Thursday nights at 9:30pm and we have just watched the next episode, that airs tonight (Feb. 28). We also have a recap of the previous week's episode "Skip the Tour" below! In the episode airing tonight, "To The Ranch," when unable to make a decision about who to nominate to the Supreme Court, President Dale Gilchrist (Bill Pullman) decides to take a family trip to their ranch to clear his head. During their getaway, Skip (Josh Gad) finds himself moping over his failed relationship, while Becca (Martha MacIsaac) contemplates major flaws in her own relationship. Meanwhile, Emily (Jenna Elfman) attempts to spend some quality time with Marigold (Amara Miller) and Xander (Benjamin Stockham), who both struggle with their loss of technology while at the ranch.

If you have ever wondered what the President of the United States does on a weekend trip with the family, you know might want to check this episode out. OK, maybe it isn't a realistic take on what the President does (or is it? hmm) but it is good sitcom fun. It is probably a little too silly or over-the-top, though. So the first family heads to a ranch in Nevada because The President needs to relax to make an important decision on who to nominate for the Supreme Court. Everyone is really making an important decision when they head to the ranch. The President obviously has to make a decision on the Supreme Court, while Becca has to decide if baby daddy D.B. is worth staying with or start a relationship with Press Secretary Marshall Malloy. Skip is heartbroken over his crush Stacy kissing someone else at the White House and in a sub-plot Emily tries to connect with her step-kids Marigold and Xander by hiding their phones at the ranch. I think the best plot of the episode is really Becca, D.B. and Marshall's storyline. It overshadows everything else in the episode and has a lot of depth and frankly is more interesting. D.B. is so clueless he botches the expression "Hindsight is 20/20" by calling it "Hindsight is 50/50." I don't think Emily's story is that interesting, while the President and Skip don't really deliver in this episode with their storylines. It's just too over-the-top. However, their scenes together are decent in the episode and their chemistry is good (the Yoda impersonation was great!). And I liked Skip on the episodes I reviewed for the pilot review. B- 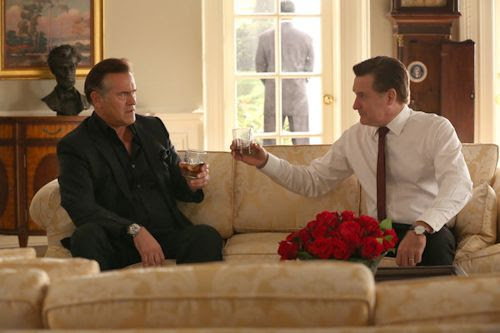 In the previous episode, "Skip the Tour," President Dale Gilchrist's (Bill Pullman) brother Doug (guest star Bruce Campbell) stops by the White House, initiating a long-standing rivalry which threatens their relationship and prompts Emily (Jenna Elfman) to take on the role of peacemaker. Meanwhile, Becca (Martha MacIsaac) prepares for an interview and Skip (Josh Gad) decides to offer his own special version of the White House tour after witnessing one from an official tour guide (guest star Rory O'Malley).

We'll recap this episode since it didn't do well in the ratings, as in fact it was a series low. This episode was not all that great. The best thing about the episode is the phrase "Skip the Tour." Skip is actually going to the official White House tour and tells the tourists to...skip the tour (Pun intended!) and go on his tour. However, once again Skip is pretty crazy and he was kind of annoying in this episode, too. This was a sub=plot, so it wasn't the main plot of the episode really. The episode mainly dealt with the arrival of the President's brother Doug. They have a rivalry going on, as I'm sure many siblings do, but this might be a little too much. Without giving anything away (well I'm not really, since this already aired), even the Secret Service is a little late. Becca and D.B. prepare for an interview with Mary Hart, but D.B. is told not to say anything except to smile. This episode just doesn't click on all cylinders and since it already aired, you should skip it if you haven't seen it yet. Unless you have watched every episode so far, well then you might have to watch it. I think Becca, D.B. and Marshall saved this episode from a lower grade. C+

Stay tuned in two weeks for our review of the episode airing March 14: "Live from the Lincoln Bedroom," where they start an official podcast of the Gilchrist White House.