Welcome to Digital Digest! We're only a few weeks away from the new year. We have some news on upcoming releases, a preview of Tuesday's releases, and a review of Perry Mason - Season 8, Volume 1. Let's get going!

DIGITAL NEWS
HBO has announced that Veep - The Complete First Season will be coming to Blu-ray and DVD on March 26. Award winner Julia Louis-Dreyfus (Seinfeld) stars in Veep, the new HBO comedy series created by Oscar nominee Armando Iannucci (In the Loop). A 3-disc Blu-ray/DVD combo will have a MSRP of $49.99. The 2-disc DVD version will have a MSRP of $39.98. Special features on both releases include 12 audio commentaries by the cast and crew, outtakes and deleted scenes, 2 featurettes ("The Making of Veep," and "Veep: Misspoke"), and a "Veep: Obesity" PSA.

Package art has been posted for Lionsgate Entertainment's Cougar Town - The Complete Third Season. The 2-disc set will have a MSRP of $19.98 and is scheduled to be released on February 5. There's currently no listing for it on Amazon.com yet, but it should be available for pre-order soon. Lionsgate is also re-releasing the first two seasons at the same price on the same day, with the same cover art as the previous sets. As we previously mentioned, Cougar Town is returning for a fourth season on TBS starting Tuesday, January 8, 2013.

Before Lynda Carter took over the role, Cathy Lee Crosby starred in the 1974 pilot of Wonder Woman. Warner Archive Collection is releasing it this Tuesday, December 11. The single-disc set has a running time of 73 minutes and will cost $14.95 at WBShop.com. Ricardo Montalban plays the laconic lothario who lurks at the top of a conspiracy to make off with ultra-secret code books, leading Agent Prince to discover an Amazon sister-in-exile (Anitra Ford).

VEI's In Search of... - The Complete Series has apparently started shipping directly from their store (update: the set was received December 10). It's also available at Amazon.com and Amazon.ca, but there's no guarantee when it will be shipping. Your best bet would probably be to order it directly from VEI via their store. We'll keep you posted on any additional details. We plan on reviewing it soon in Digital Digest. Read TVShowsOnDVD.com's post on the delays for VEI's complete series sets.

Warner Archive is releasing Police Academy: The Animated Series - Volume One this Tuesday, December 11. The 1988-1989 animated spin-off ran for 2 seasons and 64 (or 65) episodes. The Volume One release will contain 30 episodes on 3 discs. It will be available as a MOD release.

Finally, Shout! Factory will be releasing Quincy, M.E. - Season 4 on Tuesday, December 18. They've already announced that Season 5 will be available on March 19. The 6-disc set will have a MSRP of $39.97.

Tuesday (December 11) has a nice mix of releases from various genres. 20th Century Fox has Futurama - Volume 7 on Blu-ray and DVD. HBO releases the critically acclaimed Girls - The Complete First Season in a Blu-ray/DVD combo and on DVD. Shout! Factory gives us Hazel - The Complete Fourth Season. Look for our review of that set soon. VEI brings us In Search of... - The Complete Series, the 1976-1982 documentary series narrated by Leonard Nimoy. CBS DVD/Paramount releases Mission: Impossible - The Complete Series in a 56-disc set. Warner Archive has Police Academy: The Animated Series - Volume One and the 1974 Wonder Woman pilot (starring Cathy Lee Crosby) as MOD releases. 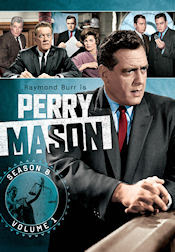 America's best defense attorney, Perry Mason (Raymond Burr) is back to prove the accused innocent and crush the dreams of more overzealous prosecutors (or really, just one) 15 more times in Perry Mason - Season 8, Volume 1! By now, you know the story (and formula) of the series: a person is accused of a crime that he or she "very clearly" committed based upon evidence, and Perry must go out of his way to show that his defendant not only did not commit the crime, but in many cases, is able to show who actually did. And in every single episode of the series, he always won. Always.
In the first episode of the season, "The Case of the Missing Button," blackmail during a divorce case accidentally leads to murder. Politics turns fatal in "The Case of the Paper Bullets." In "The Case of the Scandalous Sculptor," a woman is accused of killing the model whom her husband (an artist) is sculpting. A man turns up dead after he catches his niece stealing money from him in "The Case of the Sleepy Slayer." In "The Case of the Betrayed Bride," things don't go so well when a recently widowed aunt returns to town with a new husband, whom the family suspects is a gold-digging gigolo. An uncle ends up dead after his nephew suspects him of shady dealings in "The Nautical Knot." In "The Case of the Bullied Bowler," a conflict about a bowling alley that a woman is determined to get shut down turns in to much, much more when it actually is shut down. A trip to Switzerland is no vacation at all for Perry in "The Case of a Place Called Midnight."

The episodes seem to be unedited (as usual), with the following runtimes:

CBS hasn't really bothered changing packaging much on these releases over the past few seasons, and this one is no different. The set comes packaged in a Viva case, with a large color photo of Perry on the front, and photos of other cast members above him. On the back, there are some black and white cast photos, along with a description of the set. Inside the case, you'll find a listing of all of the episodes, airdates, and descriptions, and of course the four discs. The first three discs contain four episodes each, while the fourth disc contains just three episodes. As in the past, the artwork for each disc is the standard CBS gray standard, with the series logo (not the actual one, but the one created for the DVD sets) and a listing of the episodes printed in gray on each disc.

If you've seen any of the previous fourteen releases of this series, it should be no surprise that the menus are very plain (but clean). Each menu has a listing of episodes, an option of Play All, and an option of Subtitles. There is a still photo of Perry on the side of the menu. And as in the past, chapters and menus are placed throughout each episode.
There has never been a video and audio quality issue with any of these sets, and this is no exception. It has consistently been very well cleaned up, with just a small amount of grain and debris and a little crackle in the audio... but it still looks much better than reruns aired on TV (and to be honest, even those look pretty good). Each episode contains English subtitles.

There are no special features on this set (once again), although it is worth mentioning that Volume 2 will have some "Law Day" promo one when it comes out. Still, we don't expect that to be too much, and it is likely that neither of the season 9 sets will have a lot either.

Much like the series itself, the DVDs have remained very consistent, and fans should be satisfied once again. I enjoy watching these episodes even more on DVD than I do on TV (although I have to admit, I'm nowhere near being caught up on all of them on DVD... there are just so many!), and even though you know exactly how every episode will end, it still doesn't take the fun out of the series. It is nice to know that the second half of this season is already scheduled in just a little over a month, which means we'll likely get the final two releases of this series very shortly after that. But until then, enjoy these 15 episodes, and pick up the older releases if you haven't already!

To purchase this DVD, click below and help support SitcomsOnline.com:
Amazon.com

Who to Follow: Tom Bergeron (Twitter), TV Host (DWTS & AFV), Author, Recovering Mime.
Claim to Fame: Host of Dancing with the Stars, America's Funniest Videos, Hollywood Squares (1998-2004)
Why You Should Follow Him: Tom is our pick for the best host on television. He hosted Hollywood Squares for 6 seasons and won a Daytime Emmy Award in 2000 for Outstanding Game Show Host. He began hosting America's Funniest Videos in 2001. Since 2005, he has hosted ABC's Dancing with the Stars. He won a well-earned Primetime Emmy Award in 2012 for Best Reality Host.
Besides being a great host, he's also a super nice guy. He took the time to meet and take a photo with our very own Pavan backstage on the set of Dr. Oz yesterday. He also signed a copy of his book, I'm Hosting as Fast as I Can!: Zen and the Art of Staying Sane in Hollywood.
Mr. Bergeron has over 145,000 Twitter followers. His account is very active, with many hilarious one-liners. Fans are kept updated on his latest media appearances. He also has his very own bobblehead for sale in the ABC Store! He cautions that it WILL frighten children.
Pick of the Tweets: "1 1/2 of the original 2 1/2 men have slammed the show. Which, with apologies to Tim Allen, makes @MrJonCryer the real Last Man Standing." (November 27, 2012)

That's all for this week. Until next time, keep it digital!