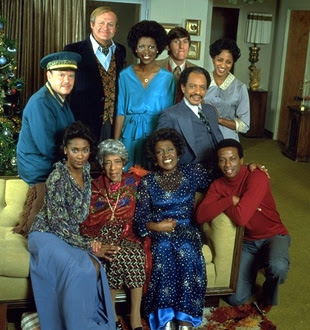 We hinted late last week that TV Land will bring back two series to the schedule. We can now reveal what they are! First, they will not be airing in high profile timeslots, but it will be good to see them airing, I guess. First up, TV Land will bring back The Jeffersons from hiatus and will air it Mon-Thurs at 5:30am starting Monday, March 5, 2012. The long-running 70s/80s sitcom will replace one of the Home Improvement encores (on Fridays at 5:30am will now be an extra Three's Company airing). What about the second series? That will be the comedic legal drama Boston Legal starring James Spader and William Shatner. The shat-tastic series will air Fridays at 8am beginning Friday, March 30, 2012. It will be replacing an airing of Murder, She Wrote, which will remain Mon-Thurs at 8am and weekdays at 1pm. There will be no other schedule changes in March or April on TV Land, as of now.
We do have some highlights to share. TV Land will have a week-long marathon of The King of Queens from Monday, April 2 through Sunday, April 8 from 9pm-12am each night. This means the regular Everybody Loves Raymond airings will air from 12-2am instead for this week only. TV Land movies now air on weekends (mostly Saturdays at 2pm) and for March the movies airing are: Miss Congeniality, A League of Their Own, Legends of the Fall, and When Harry Met Sally. As of now, TV Land is not airing movies in April. And finally, probably the most anticipated event of the year for TV Land are the annual TV Land Awards. We can reveal that TV Land will air the 2012 TV Land Awards (the 10th Annual TV Land Awards!) on Sunday, April 22, 2012 at 9pm. The awards will likely tape on Saturday, April 14 (probably in NYC for the second straight year). We will have MUCH more on this when further information is announced. What series will reunite this year after we saw many last year like Welcome Back Kotter, The Cosby Show, Facts of Life and Family Ties. Perhaps the remaining cast members of Three's Company now that Joyce DeWitt and Suzanne Somers have made up will reunite? We shall soon see, but it makes perfect sense as that series will be celebrating its 35th anniversary in March. And to connect it even more, series star the late John Ritter hosted the very first TV Land Awards back in 2002. As of now, TV Land has not booked a special marathon event for Three's Company like it did for the 25th and 30th anniversaries. All we can say is, stay with us for further information!

TBS has ordered 35 additional episodes of the top-rated dramedy Tyler Perry's For Better or Worse, which finished its first season as basic cable's #1 sitcom of 2011. The series from writer-director-executive producer Tyler Perry focuses on three couples at various stages of their relationships. The ensemble cast includes Tasha Smith, Michael Jai White, Crystle Stewart, Kent Faulcon, Kiki Haynes and Jason Olive. Tyler Perry's For Better or Worse will return to its Friday night timeslot this summer.
Tyler Perry's For Better or Worse is produced by Tyler Perry Studios and distributed by Debmar-Mercury. The show premiered on TBS Friday, Nov. 25, 2011, averaging 2.9 million viewers and 1.6 million adults 18-49 for its 10-episode debut season. It finished the year as basic cable's #1 sitcom of 2011 and the #1 show on all of television with African-American adults. Tyler Perry's For Better or Worse follows the ups-and-downs of marriage and dating. The show centers on Angela Williams (Smith), the owner of a successful beauty salon, and her husband of 13 years, Marcus (White). Marcus is a former professional football player who has recently partnered with Richard Ellington (Faulcon) and Joseph Jetson (Olive) on a new sports news program called C-Sports Now. Marcus's business relationship with Richard and Joseph is complicated, however, by the fact that Richard is dating Keisha (Haynes), Marcus's ex-girlfriend and the mother of his teenage daughter. In addition, Joseph's girlfriend, successful real estate agent Leslie (Stewart), is Angela's best friend, which sometimes makes it difficult for the couples to keep their business and private lives from mingling.
In addition to its episode order for Tyler Perry's For Better or Worse, TBS recently announced that this summer, the network will premiere the new sitcoms Men at Work, starring Danny Masterson, James Lesure, Michael Cassidy and Adam Busch, and Sullivan and Son, starring comedian Steve Byrne. Also this year, TBS will launch The Wedding Band, a new one-hour comedy series starring Brian Austin Green, Harold Perrineau, Peter Cambor and Derek Miller, Melora Hardin, Jenny Wade and Kathryn Fiore. As a result, TBS has canceled Meet the Browns after five seasons (140 total episodes). The final episode aired on November 18. TBS will continue to air House of Payne, which is in its eighth season (250 episodes) and airs Fridays at 9pm.