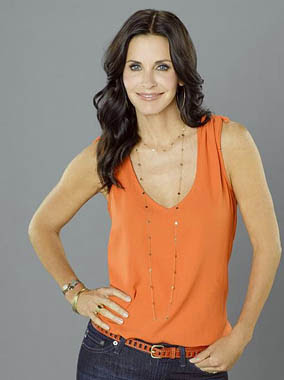 Spend Valentine's Day night with Nick at Nite on Tuesday, Feb. 14, as Nick at Nite brings you Valentine's Day-themed episodes of its hit sitcoms. The stunt will air from 8pm-12am with some encores later in the night. Nick at Nite is hopelessly devoted to love, so it will bring you episodes of Friends, That 70's Show and George Lopez. Buried in late night will be the Valentine's Day episode of Everybody Hates Chris appropriately titled "Everybody Hates Valentine's Day," as Nick at Nite is burying it in late night at approx 2am. While we get two episodes in this stunt of That '70s Show and George Lopez, they do encore later in the night in their encore time periods (12-1am and 2:30-3:30am, respectively). Friends will get four Valentine's/love themed episodes in the stunt (9-10pm and 11pm-12am).
And I have to mention it, watch Friends star Courteney Cox on the third season premiere of Cougar Town on Valentine's Day night at 8:30pm on ABC. I will be headed to the premiere screening at the Paley Center tomorrow in New York City, so if you have any questions you want me to ask Courteney or the cast, please tweet us @SitcomsOnline and we'll see what we can do! Stay tuned for a report from the event, some pictures and possibly live tweeting.