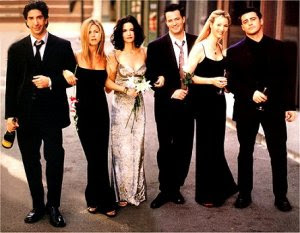 On Monday Nick at Nite altered their schedule a bit with the most notable change being the weeknight two-hour Friends block from 11pm-1am being split up now to 9-10pm and 11pm-12am. George Lopez airs in between now in the 10pm hour, as it moved back to the hour from 9pm. Nick at Nite keeps trying to move it to 9pm but it keeps coming back to 10pm where it has done historic ratings for them ever since it joined the Nick at Nite line-up over 4 years ago. Elsewhere, That '70s Show is now kicking-off the Nick at Nite block in the 8pm hour, replacing My Wife & Kids. As mentioned an hour each Friends, George Lopez and more Friends airs from 9pm-12am. That '70s Show then airs again in the 12am hour, as it was airing in the 1am hour previously. Now in the 1am hour, The Nanny has returned to a decent hour on Nick at Nite, as it had been only airing in the 5am hour. At 2am, a half-hour of Everybody Hates Chris remains, but then back-to-back George Lopez encores earlier now, replacing My Wife & Kids at 2:30am & 3am. Not to worry, My Wife & Kids airs immediately after at 3:30am and 4am. So it switched with George Lopez's encore. Then at approx. 4:30am, Home Improvement has returned to Nick at Nite with an airing (it will still remain on TV Land, too). Then at approx. 5am, an airing of The Nanny follows leading into the 6-7am hour of Family Matters still. All times on Nick at Nite are approx. after 12am, as they go off-the-clock.
So there you have it, the Nick at Nite weeknight changes. As of now, the weekend line-up is the same as it has been, but that could change. If anything major happens, we'll let you know as soon as we know.


Love is in the air on MeTV Network! On Saturday, February 12, and Valentine's Day itself (Tuesday, February 14, 2012), MeTV is the place for classic television lovers! Two days are lined up with the best Valentine's Day and romance-themed episodes from their collection of 'beloved' series. MeTV found some of the best love-related and romance-themed episodes from each of series featured in this special marathon, all while keeping the network regular program schedule in place. The love and romance begins on Sunday at 11am with The Brady Bunch and will continue with Happy Days, Laverne & Shirley, That Girl, The Dick Van Dyke Show, I Love Lucy, and M*A*S*H. On Tuesday, we get a bit more series which includes many dramas, too. It starts bright and early at 5am ET with Gomer Pyle and Dobie Gillis and other series follow like Perry Mason and Kojak. Who loves ya baby, indeed! Watch a promo.
On Sunday, April 8, 2012, MeTV Network will celebrate Easter and Passover with the broadcast of two holiday specials, Here Comes Peter Cottontail and Lamb Chop's Passover Special. Rankin/Bass debuted Here Comes Peter Cottontail in 1971 and it is one of the season's most entertaining and must-see Easter classic specials. Lamb Chop's Passover Special, which originally aired in 1996, tells the story of Passover and explains the traditions surrounding the holiday. Here Comes Peter Cottontail will air Sunday, April 8 at 6pm with Lamb Chop's Passover Special immediately following at 7pm.
As mentioned before, MeTV is pleased to work with Broadcast Partners LLC and Classic Media Library to bring programming for the whole family to the Network and have the ability to produce holiday specials such as these with the new additions of Gumby, Mr. Magoo, He-Man and She-Ra to the MeTV library. Stay with us for any other MeTV Network updates, such as what they are known for, classic TV sitcoms and dramas, such as M*A*S*H, Perry Mason, The Mary Tyler Moore Show, The Dick Van Dyke Show, The Bob Newhart Show, That Girl, Gunsmoke, the original Star Trek and Hawaii Five-O series.