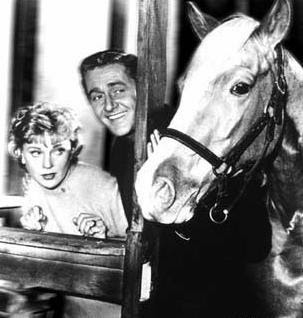 A horse is a horse, of course, of course! Hallmark Movie Channel has acquired the classic '60s sitcom Mister Ed! The series starring Alan Young is coming back to cable. The series will begin airing next month starting Monday, March 26, 2012 on Hallmark Channel's spin-off network The Hallmark Movie Channel every morning from 6-8am. The sitcom will replace a movie airing, so no series will be replaced. It has not aired on cable since TV Land stopped airing in about 2006 but the digital simulcast network THIS tv airs the series still weekday mornings at 6:30am (following The Patty Duke Show at 6am). If you don't get that network, then you'll get to see it on cable on Hallmark Movie Channel!
Hallmark Movie Channel will also still continue to air Perry Mason and Murder, She Wrote in the afternoons and encores of Murder, She Wrote in the late night. It is nice to see a sitcom join the network. Perhaps it will make an appearance on the regular Hallmark Channel for a marathon if you don't have Hallmark Movie Channel.
Speaking of Hallmark Channel, they have announced a marathon change. On Sunday, March 24 from 10am-12am, the marathon is now a We Love Lucy Marathon (aka The Lucy-Desi Comedy Hour) replacing the scheduled I Love Lucy marathon. The comedy hour also aired on Feb. 26, so perhaps it did well in the ratings so now Hallmark will air it again. Everything else we mention for Hallmark Channel in March and April will still happen, including The Mary Tyler Moore Show marathon on Sunday, April 1! Keep it right here for continued updates!


FX will be television's comedy destination this summer with the return of two of its acclaimed original series, Louie and Wilfred, the debut of its new late-night original series Strangely Uplifting with Russell Brand, and new sitcom Anger Management starring Charlie Sheen, all airing Thursday nights beginning June 28. The series premiere of FX's first-run acquired comedy Anger Management starring Charlie Sheen kicks off June 28 with the first two episodes airing at 9:00 PM and 9:30 PM ET/PT. In the following weeks, the series will air first-run episodes Thursdays at 9:30 PM with the previous week's episode repeated at 9:00 PM. FX has ordered 10 episodes of Anger Management from producers Debmar-Mercury and Lionsgate Television.
In Anger Management, Sheen stars as "Charlie," a non-traditional therapist specializing in anger management. Selma Blair, Shawnee Smith, Daniela Bobadilla, Michael Arden, and Noureen DeWulf co-star. He has a successful private practice, holding sessions with his group of primary patients each week, as well as performing pro bono counseling for an inmate group at a state prison. Prior to his career as a therapist, Charlie was a stalled minor league baseball prospect whose road to the majors was sidetracked by his own struggle with anger issues. After a stint in anger management therapy, he made it to the majors and had one terrific season before his anger issues put him on the shelf for good. In the final game of his career, he tried to snap a bat over his leg, which resulted in a career-ending injury. That injury led him back to school and to his current profession. Charlie thrives on the chaos in his life while still battling his own anger issues. His life is complicated by his relationships with his own therapist/best friend, an ex-wife whose positive outlook but poor choice in men frustrates Charlie, and their 13-year-old daughter who has obsessive-compulsive disorder. Bruce Helford serves as Executive Producer/Showrunner. Joe Roth, Mark Burg, Dave Caplan are Executive Producers.
Season two of the acclaimed hit comedy Wilfred starring Elijah Wood and Jason Gann debuts at 10:00 PM E/P. Academy Award-winning actor/comedian Robin Williams has signed on for a guest-starring role in the season opener. FX has ordered 13 episodes for season two. Season three of the acclaimed and award-winning comedy series Louie, starring actor/comedian Louis C.K., premieres at 10:30 PM E/P. FX has ordered 13 episodes of the series for season three. Finally, the series premiere of Strangely Uplifting, FX's new late-night comedy starring acclaimed actor/comedian Russell Brand, will debut, at 11:00 PM E/P. The series features Brand's unvarnished, unfiltered take on current events, politics and pop culture. The network has ordered six half-hour installments of the series that will be shot in front of a live audience. The format will draw heavily on Brand's interaction with that audience.