Seven Questions with Marion Ross from Happy Days; Sitcom Stars on Talk Shows (Week of May 9, 2011)

Mother's Day is on Sunday, and to celebrate Mother's Day, The Hub is bringing you a marathon of some of the best episodes featuring America's favorite TV mom, Mrs. Cunningham from the series Happy Days. But Mrs. Cunningham was only a character on the popular series, and behind that character is the award-winning actress Marion Ross, and we recently had the privilege of interviewing Ms. Ross, just in time for this special marathon dedicated to her and her character (which, as I learned in my phone conversation, are very much one and the same). In my interview with Ms. Ross, it became obvious very early in the conversation that she is just as wonderful as the character she played on television decades ago, and that she truly appreciates the legacy that she left by starring in that series and has a deep respect and admiration for her many fans. So, on Sunday, check out the marathon on The Hub, but before you do that, "sit on it" and check out our interview with Marion Ross, better known as Mrs. C.! 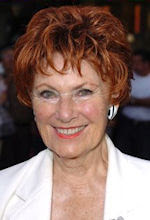 SitcomsOnline: Tell us how you got the role of Mrs. C. from Happy Days, and when you got the role, did you expect that the series and your role would become such a huge part of pop culture as it has become?
Marion Ross: We certainly didn't. We had no idea. It was wonderful. Not only did it have it's wonderful run, but to have it rerun over and over again. And now, The Hub is airing the series, so children will get the opportunity to see it again. It's just wonderful. People everywhere see me on the street and they recognize me as Mrs. C. right away, and I wouldn't have it any other way. We thought that the series could be successful, but it has taken on a life of it's own, and it is just wonderful!

SitcomsOnline: When a lot of people hear your name or see you, they immediately begin to think of Mrs. C. from Happy Days. So in what ways are you like (or not like) Mrs. C. in real life?
Marion Ross: It doesn't bother me that they think of me as Mrs. C., but if you think about it, we all need a handle. They don't think about your whole career and everything that you stand for. Of course, I am pretty much like that. When the guys like a series, they start to like you. It's a really great feeling. I'm not so sure how I'm like or not like her, but I really do enjoy being known to people, especially these guys that I meet out on the street who instantly recognize me as Mrs. C. and they admire and respect the character, and me for that matter.

SitcomsOnline: What were some of your favorite moments from Happy Days? Were there ever any things that you just hated doing for any reason?
Marion Ross: We have one where I'm trying to revive our marriage, and I come down in this outfit and I'm not sure if I can do this. But it is like children at play, and mostly a lot of fun. Sometimes we'd get into fights like a real family, but we'd get along. Garry Marshall, our producer, knew that we didn't want to do certain things and we'd get into little spats but we'd always just end up doing whatever he wanted us to do anyway. You'll see one of those episodes Sunday on The Hub, the "Dance Contest" episode where I take tango lessons from the Fonz. I wasn't so sure about it, but it turned out great.

SitcomsOnline: Happy Days is one of the few sitcoms from that era where many of the younger actors went on to continued success in life. How often do you interact with those whom you played the TV mom to?
Marion Ross: The Fonz (Henry Winkler) is in Boston starring in a movie called Here Comes the Boom with Kevin James. They're kind of off doing their own things and they're pretty successful at it. It's great to know that I was such a great mom to them and raised them so well! (laughs)

SitcomsOnline: Here's a question that the TV conspiracy theorists all over the world really want an answer to: what happened to Chuck Cunningham? Or is that a secret that even his own TV mother isn't allowed to have the answer to?
Marion Ross: (laughs) Gosh, I feel so bad about that! We had multiple Chucks, and none of them just seemed to work with the cast. It was a running gag on the set that we'd always say "there's Chuck!" at the most unusual times. One time, we were shooting in Malibu, pretending it was Hawaii, and Tom Bosley said "look over there, it's Chuck!" You know, I really ought to make up with some big story about what happened to Chuck just to have a story to tell and impress people, but there really isn't one.

SitcomsOnline: You've had roles on television going back to some of the earliest days and continue to do roles today, so as TV has evolved, what changes do you think have been positive? And which ones have been not-so-positive?
Marion Ross: Our whole culture has changed really, and I really liked the older culture more. I don't really think that TV has changed so much, but it is more of the culture as a whole. Just the other day, I saw a little girl outside playing a game on a cell phone and I just wondered why don't her parents come to play with her? We've gotten so much into our iPods and everything these days that we just don't take time to relax.

SitcomsOnline: Would you be interested in taking on a regular or recurring role on a TV series these days? Is there any type of character that you have never played on television that you would like to play?
Marion Ross: I would, especially if it was if it was like films and I could work two days or so and be done with it. TV is a lot of work, but in movie roles, you can just work a few days and be done. I've done a few roles like on Brothers & Sisters as the mother of Sally Field's character but that is done with, they killed her off. Then there was Nurse Jackie, which I loved doing, where I played a dementia patient. I have done quite a few roles that are different from who I am, such as a show called Brooklyn Bridge, where I played a Jewish character living in New York City. It was created by Gary David Goldberg, who also created Family Ties, and it won numerous awards but it only ended up lasting a few seasons. Next year though, I'll be on stage in Toronto in the starring role of Neil Simon's Lost in Yonkers, where I'll get to play another Jewish character from New York, so that should be interesting.

Ms. Ross had quite a bit more to say that we couldn't quite fit in our scope of our "seven questions" format, and we love her for the additional contributions that she made. In regards to her other work on TV, she talked quite a bit about her role as the grandmother on the Fox series That '70s Show, where she played a role that was very much different from the role that she played on Happy Days. In fact, she described the role as a "chain-smoking grandmother with bowel problems." As she mentioned in the interview, she very much enjoys playing in these roles that are a lot different from the role that most people associate her with, but she certainly doesn't mind being known as Mrs. C. Also, in regards to the "disappearing Chuck" on Happy Days, she brought up the fact that Chuck definitely wasn't the only kid who disappeared, but Richie Cunningham also disappeared in the later seasons. Of course, any Happy Days fan knows that, but what they may not realize is the extremes that they had to go through to avoid using the on-screen likeness of Ron Howard. She mentioned that after he left the series, his new contract prohibited the Happy Days producers from showing him on-screen in any way, meaning that the most that they could do is talk to Richie on the telephone. Even photos of Ron Howard that could potentially appear on camera couldn't be shown!

We deeply appreciate Ms. Ross for giving us the time and opportunity to interview her, and for continuing to entertain generations of viewers through reruns of Happy Days and her continuing work on the big screen, the small screen, and on stage! Don't forget to catch the "Mom-a-thon," airing 6:00 PM to 12:00 AM ET on Sunday, May 8, on The Hub. You can catch the following episodes of TV's favorite mom:

6:00PM "Dance Contest" - Mrs. Cunningham secretly takes tango lessons from the Fonz.
6:30PM "Marion Rebels" - Mrs. Cunningham takes a job as a waitress at Arnold's to escape her routine.
7:00PM "Marion: Fairy Godmother" - Ralph and Leather are transformed into a fashionable couple for the ROTC Ball.
7:30PM "Marion Goes to Jail" - Marion lands herself in jail when her car crashes through Al's drive-in.
8:00PM "Empty Nest" - Joanie has left the Cunningham house, Marion looks to find ways to cope and occupy her time.
8:30PM "So How Was Your Weekend" - Marion's finicky mother causes rift when she visits the Cunninghams.

Leave us comments on our message board or Tweet/Facebook us to let us know what you think of this Friday feature! We do listen!
Skees -- SitcomsOnline.com at 12:00 PM
Share
‹
›
Home
View web version