Week 4 numbers (first three nights, Mon-Wed):
NOTE: Thursday is not in this week in our averages once again, but we do have final program numbers in the analysis below:

Airing tonight (Sunday) are no sitcoms.

Summing it up. Two and a Half Men, How I Met Your Mother, The Big Bang Theory, Samantha Who, The Office, were impressive for the week. Everything else was OK (such as Worst Week, Gary Unmarried) or just plain old terrible (such as Kath & Kim, Everybody Hates Chris). 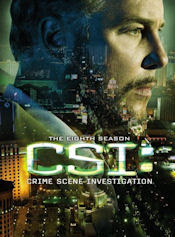 Follow the evidence... again and again. One beloved character departs--and another dies--in the shocking eighth season of CSI: Crime Scene Investigation. This bonus-filled collection includes crossover episodes, an episode directed by William Friedkin (The Exorcist) and CSI's most devastasting scenes ever.

This 5-disc set contains all 17 episodes from the eighth season (2007-08) plus a bonus crossover episode of Without A Trace. The episodes are presented in Anamorphic Widescreen enhanced for 16:9 tvs with Dolby Digital 5.1 Surround audio. It has a total running time or approximately 12 hours, 12 minutes. The attractive packaging has a large photo of William Petersen (with the beard) on the front with Las Vegas in the background. At the bottom of the box, there is an embossed CSI: Crime Scene Invesigation logo. Nine cast members are featured on the back of the box with some Las Vegas hotels/casinos in the background. A synopsis of the set, a listing of the special and the DVD specs are given. The inside case is in a book format that you can flip through to get to the discs. Thee is a photo of Petersen and Helgenberger on the cover and Eads, Fox, Dourdan and Szmanda on the back. A content locator lists the episodes by disc and the special features on the inside cover. Each disc lists the episodes and has the show logo and an x-ray/fingerprint type background. It was interesting to see that they stuck to this type of packaging when CSI: Miami and CSI: NY switched to slimcases for their recent releases. They still even include the crime scene tape around the packaging. That is a nice touch.

The menus are very slick looking and easy to navigate. They have a montage of video clips that run a little over a minute, with some of the wonderful instrumental music by composer John M. Keane in the background. Options are available for Episode Selection, Set Up, Previews (only on Disc 1) and the Special Features on select discs. On the Set Up menu, you can choose either Dolby Digital 5.1 English Surround or Español. Closed captioning is available for all of the episodes. As you would expect from such a recent show, the video and audio quality is outstanding. The show looks stunning. They do a lot of nighttime shooting and make the show look dark and like a theatrical film. I did notice that there is a disclaimer on the bottom of the box that says "some episodes may be edited from their original network versions." This is the first time that I can recall such a disclaimer on any of the CSI franchise releases. Hopefully it is nothing major. While the episodes are numbered by their production number, they are presented in the order of their original airdates. Running times are between 41 and 43 minutes in length.

Once again, there is a nice amount and variety of special features. Unfortunately, there are only 2 audio commentaries on this set compared to 7 from last season. That seems to be a recent trend on the CSI franchise releases. There are 6 featurettes that total approximately 63 minutes. A bonus crossover episode of Without A Trace is included. Here is the breakdown by disc:

Disc 2
Without A Trace episode: "Where & Why" (42:56) - This crossover episode aired after the CSI episode "Who & What" on November 8, 2007. It was nice that they were able to include this episode, since Warner Bros. doesn't seem very interested in releasing this excellent series on DVD. It's too bad CBS decided to move it again to another night. I think it's a perfect fit airing after CSI.

While The Cast's Away, The Rats Will Play (13:58) - This featurette includes interviews with Executive Producer Carol Mendelsohn, Writer Doug Petrie, Archie Kao, Executive Producer Naren Shankar, Wallace Langham, Liz Vassey, Jon Wellner, Gerald McCullouch, Paul Guilfoyle, George Eads, Sheeri Rappaport and David Berman. This featurette focuses on the episode "You Kill Me." This was the 9th episode of the season and aired on Thanksgiving night. It had a lot more humor than the typical episode. There was a similar "Lab Rats" episode last season. This is a nice companion featurette with the audio commentary.

William Friedkin: A Different Take (9:28) - This featurette includes interviewss with William Petersen, Executive Producer Carol Mendelsohn, Paul Guilfoyle, Director William Friedkin, Producer/Writer Dustin Lee Abraham and Gary Dourdan. It focuses on the "Cockroaches" episode. They talk about how the idea was pitched to Friedkin, the mob storyline and finding the strip club location.

Disc 4
Deleted Scene for "Grissom's Divine Comedy" (2:16) - A funny scene where Catherine goes to Grissom's house and does a little snooping and investigating. It was probably just cut for time, so it is nice that they were able to include it on the DVD.

Disc 5
So Long, Sara Sidle (15:20) - This featurette includes interviews with Executive Producer Carol Mendelsohn, Executive Producer Naren Shankar, George Eads, William Petersen, Jorja Fox, Robert David Hall, Marg Helgenberer and Gary Dourdan. Among the topics covered are how they wanted to give her a dignified and graceful exit, how Jorja Fox originally got the part, her character, her favorite part of the show and what she will miss the most. There are some clips shown from previous seasons and some behind-the-scenes shots from her last day of shooting. They obviously left open the possibility of her returning for more episodes. She's already been in the first couple of episodes this season but probably not many more when William Petersen departs the show.

What Happened In Vegas... (21:12) - This featurette includes interviews with Executive Producer Naren Shankar, Executive Producer Carol Mendelsohn, Gary Dourdan, William Petersen, Paul Guilfoyle, George Eads, Marg Helgenberger, Eric Szmanda and Robert David Hall. This provides a good overview of the eighth season. They talk about how the end of season seven defined the eighth season, their first cliffhanger with Sara trapped under the car, the 7 episode goodbye Sara arc, Sara and Grissom's relationship, Warrick's divorce and personal drama, the Lou Gedda/mob storyline, Brass' character, Nick's maturation, how they keep it fresh, and how they always find new and exciting ways to kill people.

Shot In The Dark (9:22) - This featurette includes interviews with Executive Producer/Director Kenneth Fink, Director of Photography Nelson Cragg, Directory of Photography Nathan Hope, and Co-Executive Producer/Director Richard J. Lewis. They talk about the look of the show, how they give it a theatrical look with the lighting, how the look has evolved, how shooting at night takes a lot of planning, making Los Angeles look like Las Vegas, and their favorite part of working on CSI. Each of the looks on the CSI franchise shows is unique, but the original is still my favorite.

TOD: A Bug's Life (21:33) - This featurette includes interviews with Executive Producer Carol Mendelsohn, William Petersen, Dr. M. Lee Goff - Director of the Foresnic Sciences Program at Chaminade University of Honolulu, Dr. Neal Haskell - Associate Professor - Dept. of Biology at St. Joseph's College, Dr. Richard W. Merritt - Chairperson - Dept. of Entomology at Michigan State University and Olivia Klosternan - Student at St. Joseph's College. It focuses on forensic entomolgy, which is the application and study of insect and other arthropod biology to criminal matters. They talk about Grisson being an entomologist, the various techniques of how they study the decomposing of bodies and the sequence of colonization of bugs over time, how it is difficult for them to identify specific times of death and that's it's not an exact science, and the future of forensic entomology. They show various pig farms at Chaminade University in Honolulu, Michigan State University and in Renesselaer, Indiana. Some fascinating stuff. Gil Grissom's interest in bugs is not really a huge part of CSI, but it's always fun and interesting when they go back to it from time to time. Various clips from previous CSI seasons are also shown.

Final Comments: It was a sad and shocking season of CSI. First, we saw Jorja Fox's Sara Sidle depart from the show after a 7 episode story arc. Then we saw the shocking shooting of Gary Dourdan's Warrick Brown character in the season finale. The strike definitely hurt their momentum, as they made only 17 episodes this season compared to 24 in season seven. This season really had a bit of everything with a sad goodbye, some humorous episodes, an entertaining crossover episode with Without A Trace, and a shocking season finale. It remains the best crime drama on television.

This is another very good release, but I think it's a little overpriced because there were only 17 episodes this season. They cut back on the commentaries from 7 to only 2 this season. There are still 6 featurettes, but they around 30 minutes shorter than the previous season. You are basically paying the same amount as previous seasons to get less material. CSI is still going strong, but I wonder how many major characters they can continue to lose and still continue to draw a huge amount of viewers.

To purchase the DVD, click below and help support SitcomsOnline.com:
Amazon.com