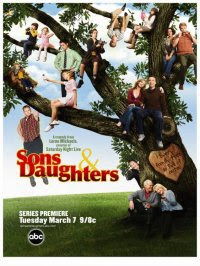 Fred Goss (“Significant Others”) stars in this unique hybrid comedy series that offers a mix of improvisational and scripted humor in an unadulterated look at marriage, raising children and living in close proximity to an extended family. Series creators Goss and Nick Holly borrow from their own middle-American, middle-class upbringings to deliver a very real and relatable modern-day family comedy.

Coming this March to ABC is a sitcom that brings the dysfunctional into family. The sitcom Sons & Daughters is a hybrid improv comedy series that has no studio audience or canned laughs. And it's coming to a television near you starting March 7, airing Tuesdays at 9:00/8:00 & 9:30/8:30 central only on ABC!

Read our review of the pilot episode here.

Discuss the show after you watch it on Tuesday on our message board.