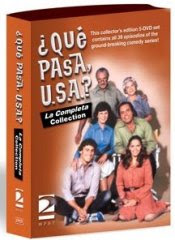 ¿Qué Pasa, USA? was America's first bilingual situation comedy. The program explored the trials and tribulations faced by the Peña family of Miami as they struggled to cope with a new country and a new language. The series focused on the identity crisis of the members of the family as they were pulled in one direction by their elders - who wanted to maintain Cuban values and traditions - and pulled in other directions by the pressures of living in a predominantly Anglo society.

The series was bilingual, reflecting the mix of language often heard in Cuban-American neighborhoods - from Spanish in the home and English at the supermarket to the inevitable combining of both into "Spanglish."

¿Qué Pasa, USA? aired on PBS nationwide from approximately 1977-1981. A total of 39 episodes were produced over 3 seasons. The show was produced and taped live before a studio audience at PBS affiliate WPBT in Miami, Florida. In recent years, the series has been shown on Galavisión.

¿Qué Pasa, U.S.A.? La Completa Collection is available to purchase on the official site via their store. The 5-Disc Collector's Edition includes all 39 episodios of the ground-breaking comedy series. It will set you back mucho dinero: $99.95 plus $6 shipping and handling. This seems like an internet-only offer. You won't be able to order it on Amazon.com or buy it in stores.

The site, owned and operated by WPBT Channel 2, includes a number of other goodies including a photo album, desktop wallpapers, video clips, and an addicting Qué Pasa Concentration Game.