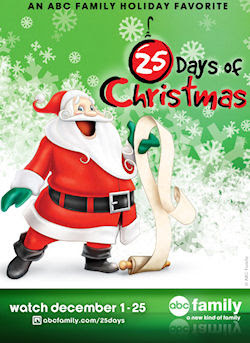 We gave you ABC Family's Countdown to 25 Days of Christmas (Nov. 18-30) schedule, now it's time to give you the actual 25 Days of Christmas (Dec. 1-25) schedule for 2012! The 25 days of holiday programming starts on Saturday, December 1 at 7am with the holiday special Mickey's Once Upon a Christmas followed by movies all day long! This year, "25 Days of Christmas" will feature the world premiere of the ABC Family original holiday musical, The Mistle-Tones, starring Tia Mowry (The Game, Tia and Tamera) and Tori Spelling (Beverly Hills, 90210). Premiering Sunday, December 9 (8:00-10:00 PM ET/PT), the new original movie follows Holly (Mowry), a young woman who decides to create her own Christmas singing group when she is turned down for a spot in legendary group The Snow Belles by the mean spirited Marci (Spelling).

Among the movies I didn't mention airing include Richie Rich's Christmas Wish, A Dennis the Menace Christmas, Miracle on 34th Street (1994), Dr. Seuss' How the Grinch Stole Christmas, Home Alone 4, The Santa Clause, The Santa Clause 2, The Santa Clause 3, Holiday in Handcuffs, and Christmas Cupid. And among the specials I didn't mention include Mickey's Twice Upon a Christmas, Mickey's Christmas Carol, Winnie the Pooh & Christmas Too, Dr. Seuss' The Cat in the Hat, The Little Drummer Boy, Pinocchio's Christmas, The Story of the First Christmas Snow, Disney Prep & Landing, Prep & Landing: Naughty vs. Nice, and A Chipmunk Christmas. Holiday episodes of sitcoms like Boy Meets World, 8 Simple Rules, & Reba will air in their time periods and Full House will get a special airing on Monday, Dec. 24 at 9am, as that series has been on hiatus for awhile. Also, just for the holidays, a holiday mini-marathon of the '90s series Beverly Hills 90210 will air Thursday, Dec. 20 from 7am-11am leading into movies starring cast members from the series like Christmas Caper starring Shannen Doherty.

Other ABC Family December 2012 highlights includes the ABC Family premiere of the Eric Bana movie Hulk on Thursday, Dec. 27 at 8pm and the ABC premiere premiere of Spy Kids on Saturday, December 29 at 9:30am.
View the FULL 2012 ABC Family 25 Days of Christmas schedule. You won't want to miss anything, so print out and enjoy!


A Cheers reunion maybe? Rhea Perlman will reunite with longtime friend and former Cheers co-star Kirstie Alley in the sitcom pilot Giant Baby. Perlman will play Thelma, Maddie's (Alley) long-suffering assistant and best friend, who encourages her boss to form a relationship with the son she gave up for adoption, Arlo (previously known as Owen). The network originally announced the Alley-headlined project as a presentation last month. Giant Baby revolves around Madison "Maddie" Banks, a Broadway star who finds her life turned upside down when Arlo, her long-lost son, turns up looking to connect after his adopted mother has died. However, Maddie doesn't exactly see nerdy and schlubby Arlo fitting in with her luxurious lifestyle. When her attempt to change Arlo backfires, Maddie finds that perhaps they both could use a little change in their lives.
Giant Baby is written and executive produced by Marco Pennette and is also executive produced by Kirstie Alley and Jason Weinberg. Larry W. Jones and Keith Cox serve as executive producers for TV Land. Both Alley and Perlman were in the ABC pilot The Manzanis last season but it never made it past pilot. Stay with us to see if this pilot goes past the pilot stage and gets a series order. There is a good chance it will and it will join Hot in Cleveland, Happily Divorced and The Exes. But stay tuned...