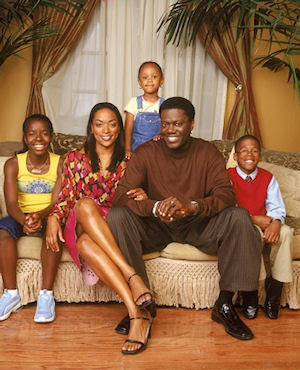 Centric will be adding Bernie Mac to its sitcom line-up starting on Monday, Feb. 27. The sitcom airs on sister network BET every weekday morning from 8-10am, but it will now also air on Centric. The cable network will air it weekdays from 2-3pm and again from 7-8pm. Both hours will replace The Jamie Foxx Show, which as of now, will be off the line-up completely. As of now, BET is keeping Bernie Mac on the schedule when Centric adds the series, but if that changes, we'll let you know. And we'll let you know if Jamie Foxx heads to BET or returns to Centric at some point.
Centric will welcome Bernie to the line-up with a weekend marathon on Saturday, Feb. 25 and Sunday, Feb. 26 from 10am-9pm on both days. Elsewhere on Centric, they will have a "The Cosby Show: Bill Cosby For President" marathon on President's Day (Monday, Feb. 20) from 9am-9pm, but that's not all! They will also air the 2002 two-hour retrospective special The Cosby Show: A Look Back from 7-9am (encores 11:30pm-1:30am). Additionally, the Centric premiere of the 2009 half-hour special The Cosby Show 25th Anniversary Special, which originally aired on WGN America and in syndication, airs at 9pm (encores 1:30am). Other stunts include weekend marathons of The Steve Harvey Show (Mar 3-4), In Living Color (Mar 10-11), The Wayans Bros. (Mar 17-18), Girlfriends (Mar 24-25), and 227 (Mar 31-Apr 1).
If you don't know, the weekday Centric schedule starts off with NY Undercover at 6am, followed by '80s classics The A-Team and Miami Vice. After a two-hour break for some music, two-full hours of 227 airs from 11am-1pm, child. Afternoons has Girlfriends in the 1pm hour, followed by Bernie Mac at 2pm. Then the Centric movie airs at 3pm leading into the evening sitcoms starting at 5pm with an hour each of The Wayans Bros., The Steve Harvey Show and more Bernie Mac. In primetime, the '80s classic The Cosby Show leads it off at 8pm, followed by an hour each of Girfriends and The Wayans Bros. In late night, The A-Team will continue to protect 11pm, leading into The Steve Harvey Show and The Cosby Show from 12am-2am. In the overnight, the encore of the afternoon movie will air at 2am leading into an hour of In Living Color at 4am and an airing of drama The Unit at 5am. So it's a nice mix of sitcoms and dramas, but let's hope we get more series soon, too. Perhaps an older series in the vein of 227 and Cosby Show? We'll let you know if that happens, but for now enjoy this schedule with the addition of Bernie Mac and all of the weekend marathons that will start on Feb. 25.