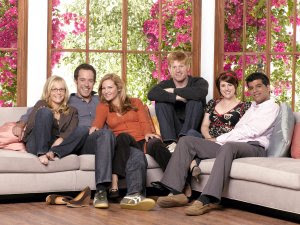 Notes from the Underbelly - Regular Airings Wednesdays at 8:30PM ET/PT on ABC
Premieres Thursday, April 12th at 10 and 10:30PM ET/PT

Director/producer Barry Sonnenfeld and producers Kim and Eric Tannenbaum ("Two and a Half Men") bring a comic take on life's greatest adventure -- parenthood. This ensemble comedy proves that surviving the politics of pregnancy and maintaining your relationships with family and friends can be just as demanding as raising a child.

Andrew (Peter Cambor) and Lauren (Jennifer Westfeldt, "Kissing Jessica Stein") have just found out they're going to have a baby, and they're having a difficult time following rule number one -- keeping it a secret. Suddenly switching to decaf, becoming a teetotaler at cocktail parties, and going to the OBGYN are all difficult to keep from family and close friends.

Surrounding Andrew and Lauren as they embark on their journey is a close-knit circle of friends -- all of whom have varying opinions, experience and advice on starting a family. Julie (Melanie Paxson) and Eric (Sunkrish Bala), also in the family way for the first time, are the overly excited, slightly obnoxious expectant parents that Andrew and Lauren never want to become. Lauren's best friend, Cooper (Rachael Harris), is a divorce attorney and career woman who is skeptical of marriage altogether, and will do her best to keep Lauren from becoming another member of the "mommy cult." Andrew's buddy, Danny (Michael Weaver), is an immature child in his own right, whose chief concern is meeting hot women. Can Andrew and Lauren juggle the freedom and spontaneity of their old lives and the responsibility of their new ones? Will they be able to straddle the worlds of their carefree single friends and the ever-changing world of their married ones?

Andrew will narrate each episode, giving his wry and often sarcastic interpretation of the events that are going on around him. Lauren may be getting the stretch marks, but Andrew has to pretend that he doesn't notice them. Through it all, Andrew and Lauren come to learn that what's best for the child could be the easiest part... maintaining your relationships with family and friends might be the real challenge.

Based on Risa Green's novel of the same name, "Notes from the Underbelly" was created by Stacy Traub ("Kitchen Confidential.") Traub, Barry Sonnenfeld, Kim Tannenbaum and Eric Tannenbaum serve as executive producers. The series is from The Tannenbaum Company, Hill Three Productions in association with Warner Bros. Television.

Read our review of the pilot and two other episodes here.

Discuss the show after you watch it on Thursday on our message board.